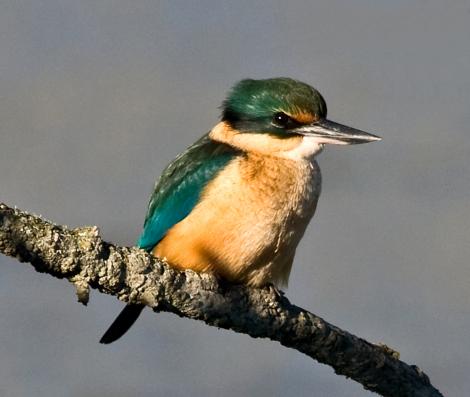 The sacred kingfisher is one of the best known birds in New Zealand due to the iconic photographs published over many years by Geoff Moon. These early images showed in detail the prey, the foraging skills and the development of chicks in the nest and as fledgings. Equally recognisable is the hunched silhouette waiting patiently on a powerline or other elevated perch over an estuary or mudflat which converts in a flash to a streak of green diving steeply to catch a prey item.

Kingfishers are found widely in New Zealand in a wide range of habitats: the key ingredients are elevated observation posts to hunt from, banks or suitable standing trees to excavate nests in, and open or semi-open habitats which support a range of prey items.

A distinctive bird with a green-blue back, buff to yellow undersides and a large black bill. It has a broad black eye-stripe from lores to ear-coverts, and a white collar in adults. The underparts vary with wear; orange buff to buff when fresh but fading to cream or white when worn. The bill is black with a narrow pale strip on the lower mandible; the iris is dark brown with a black orbital ring. The legs and feet are grey or pink-brown. There are slight difference between the sexes, with females greener and duller above. Immatures are duller, with buff feather edges on upper parts and brownish mottling on the chest and collar. The distinctive hunched silhouette on power-lines over water, and direct flight between perch and food and return to perch are characteristic. Flight swift and direct with rapid shallow wing beats interspersed with fast glides.

Kingfishers have a wide range of unmusical calls, the most distinctive of which is the staccato ‘kek-kek-kek’ territorial call.

The distinctive green-blue back and cap along with heavy black bill distinguishes it from other species.

Present on all three main islands and the Kermadec Islands. Vagrant to the Chatham Islands, and absent from the subantartic islands. Recorded in both coastal and inland freshwater habitats. Common on farmland with trees, and along river banks. Uncommon well inland and in mountainous regions. More frequently encountered in the North Island than in the southern South Island.

A wide range of forest, river margins, farmland, lakes estuaries and rocky coastlines; anywhere where there is water or open country with adjacent elevated perches.

Common and widely distributed. Kingfishers congregate in coastal districts and lowlands during winter. They have benefited from the creation of artificial structures such as powerlines and posts beside and over estuaries. They have also probably benefited from forest clearance and the increased amount of forest edge habitat and the planting of exotics (willow & poplar along rivers). Population densities have been measured at 0.75/km based on several road-based surveys in the North Island, and 0.106/km from the northern South Island.

Kingfishers are occasionally caught by cats, and many are killed or stunned by flying into window glass. They have been considered a threat to goldfish, trout, domestic fowls and bees in the past, and were persecuted as a result.

Nest sites are in a wide range of trees sites, cliffs, banks and cuttings. In all sites a nest chamber is excavated initially by repeatedly flying at the intended site and using the bill to chisel out dirt. Once a purchase point is created, the birds peck and scoop out the rest of the nesting tunnel and nest chamber. The nest is generally not lined, but regurgitations can accumulate. Incubation is shared, but predominantly by the female. Based on limited banding in Wellington, kingfishers appear to have high fidelity to breeding sites. The same burrow has been reported in use for 20 consecutive years, but it is not known how many birds were involved.

Mating occurs in early September with nest building or refurbishment in October. Second clutches can be laid as late as February.

Can be evicted by starlings, mynas and sparrows. Adults can be extremely aggressive in defending nesting site, strategies include repeated staccato calls from nearby perches, responses to calls by neighbouring pairs, and dive-bombing of birds (including other kingfishers) and mammals.

Chicks are fed by both parents on food similar to the adult diet. At some sites small chicks were fed spiders and insects, with larger items of food such as fish included as the chicks grew. At other sites there was reported to be no difference in food size fed to chicks. Chicks are initially fed in the nest but as they grow they are called out to the entrance by the adult. Chicks are fed for 7-10 days after leaving the nest and then start to catch food for themselves.

Mostly recorded singly or in pairs. The breeding pair is the most normal social unit, only occasionally at the end of the breeding season will larger groups be observed. They are most conspicuous when roosting on powerlines along estuaries or coastal roads. Kingfishers will use a wide range of perches, including washing lines, fences stacked rocks etc. generally more than two metres above the ground. They rarely perch on the ground. In New Zealand, kingfishers migrate altitudinally, with those birds breeding inland at up to 700 m above sea level, moving to the coast in the winter. There is no direct data about internal migration; seasonal movements more relate to use of habitats and secondarily to movements between higher altitude nesting sites and winter coastal roosts.

A wide range of terrestrial and aquatic invertebrates and vertebrates are taken, mostly from the ground, depending on the habitat. Aerial foraging and foraging from flowers and/or leaves has been reported. Kingfishers have been recorded diving between 2 cm and 1 metre into water to take prey. In estuarine mudflats the diet is mainly small crabs. In freshwater habitats a range of tadpoles, freshwater crayfish and small fish are taken. In open country insects such as cicadas, beetles, stick insects and weta are caught, along with spiders and small vertebrates, including lizards, mice and small birds. Kingfishers return to a perch with their prey, where they batter larger items before consumption. Various hunting strategies have been reported where birds sally forth from a perch and return with prey, plunge either shallowly or deeply into water, or probe into rotten logs. Prey are swallowed whole and pellets of indigestible remains are regurgitated.

Moon, G. 1979. The birds around us : New Zealand birds, their habits and habitats. Heinemann, Auckland.

A medium-sized kingfisher with a green-blue back, yellow-buff undersides, a large pointed black bill, a broad black eye-stripe from lores to ear-coverts, and a white collar in adults. Immatures are duller, with buff feather edges on upper parts and brownish mottling on the chest and collar.