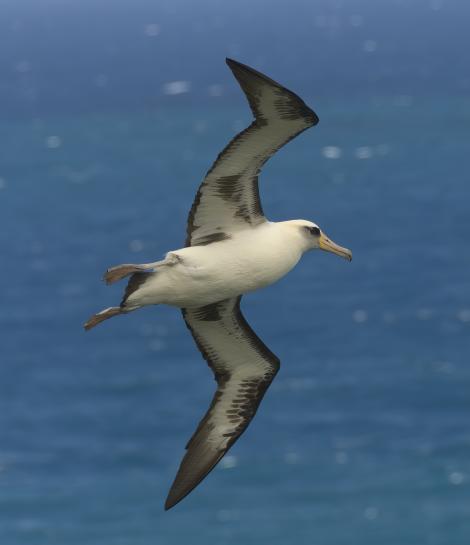 The Laysan albatross is a white-and-black albatross of the northern hemisphere, named after an island in the north-western Hawaiian archipelago (USA) where the species breeds. It resembles the slightly larger black-browed mollymawk of the southern hemisphere. Most Laysan albatrosses breed in the Hawaiian archipelago, with smaller numbers breeding on outlying islands of Japan and Mexico. Large numbers were killed for the feather trade in the early 1900s, to reduce risk of airstrike in 1940s-1950s, and in the 1990s to early 2000s when birds were caught and drowned in commercial longline fisheries. More recently numbers have increased and the species was downlisted from Vulnerable to Near Threatened on the IUCN Red List in 2010. The global population is an estimated 2.5 million individuals. After breeding, birds disperse widely over North Pacific Ocean. The occasional records in the southern hemisphere include one from New Zealand in 1995.

The Laysan albatross has a white head, body and undertail, contrasting with the black mantle, upperwings, back and tail. In flight, the largely white underwings show black margins and variable black streaking on the coverts, and the pinkish feet project beyond the tail. A dark patch surrounds each eye, grading to grey below the eye and onto the cheek. The long pinkish bill has a grey-black tip. The sexes are alike, with the male slightly larger. Juveniles resemble adults but with a greyer bill and darker rump, and sometimes with darker underwings.

Voice: the adult repertoire includes groaning and gurgling sounds made while feeding at sea; cries and whines accompany breeding displays.

Similar species: adults resemble the slightly larger black-browed mollymawk but have more extensive black and grey around the eyes and face, and longer, pinker bills that grade to buff and grey-black at the tip. The bill of the juvenile black-browed mollymawk is similar but loses the blackish colouring at the tip with age, becoming orange-yellow. The much larger adult short-tailed albatross has a yellowish head, white back and pink bill.

Virtually all breeding Laysan albatrosses form colonies on islands and atolls in the north-western Hawaiian archipelago, with far fewer birds in small colonies on islands off Baja California (Mexico) and outlying islands of Japan. In the early 1900s, breeding populations were wiped out on Wake and Johnston atolls and Minami Torishima in central Pacific. Birds disperse to sea in the North Pacific Ocean in the non-breeding season. Occasional records in the southern hemisphere include one from New Zealand close to a fishing vessel near Lachlan Banks, 30 km off Cape Kidnappers, Hawkes Bay, in December 1995.

The total global population of Laysan albatrosses is estimated at 2.5 million individuals, including c. 600,000 breeding pairs, with the largest colonies on Midway Atoll and Laysan Island in the Hawaiian archipelago. Some monitored populations increased during 1980-1995 but did not return to the numbers observed prior to large-scale exploitation for the feather trade in the early 1900s. Another study indicated an overall c.30% decline during 1992-2002. Since then the breeding population appears to have increased and the population trend stabilised.

The main threats to Laysan albatross are commercial fishing, ingestion of plastic debris, and sea-level rise. Discarded waste plastic at sea is commonly mistaken for food items. An estimated 98% of Laysan albatross chicks were fed plastic beads, synthetic foam, fishing line, buttons, cigarette lighters, beach toys, PVC piping, plastic bags, golf tees, plastic gloves, marker pens and aluminium foil by parental birds that swallowed the objects at sea, mistaking them for genuine food items. Once swallowed such items often block and damage the bird’s digestive system, leading to starvation and death. Hawaiian breeding sites are protected as part of the US conservation estate. In 2006, the Papahânaumokuâkea Marine National Monument established a no-take marine reserve encompassing all the north-western Hawaiian Islands. In 1991, a 50-nautical mile Protected Species Zone was established around the north-western Hawaiian Islands, prohibiting longline fishing. The Hawaiian longline fleet is also required to use measures that reduce seabird bycatch. Predators are controlled at colonies. Reclassified from Vulnerable to Not Threatened by IUCN in 2010.

All of the large Laysan albatross colonies are on low lying atolls, where the breeding birds are vulnerable to storm surge and tsunami. About a thousand adults and tens of thousands of chicks were killed on Midway Atoll by the March 2011 Fukushima-Daiichi tsunami, highlighting the vulnerability of breeding Laysan albatrosses to sea-level rise associated with global climate change.

The Laysan albatross is an annual colonial breeder with a protracted breeding cycle, usually starting in November. Some birds skip breeding in some years. The first 7-9 years of life are spent at sea, before birds return to land for first breeding. The nest is a shallow sand scrape or small debris-sand mound built on open ground near vegetation. Elaborate courtship displays include mutual bill touching and sky-pointing, in which bird stands on 'tip-toes', stretches neck and points bill skywards. Laysan albatross are monogamous; the single large buff-white egg is incubated by both adults for c.65 days, followed by a c.160 day chick-rearing period. Both adults feed the chick regurgitated food items and stomach oils, alternating several day at-sea foraging trips. One bird aged 62-years reportedly bred in 2013.

A medium-sized white-bodied albatross with black mantle, upperwings, back and tail, a dark patch around each eye grading to grey below the eye and onto the cheek, and a very long pinkish bill with a grey-black tip. In flight, the largely white underwings show black margins and variable black streaking on the coverts, and the pinkish feet project beyond the tail.