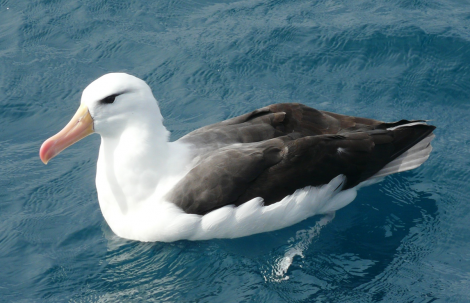 The black-browed mollymawk is a medium-sized black-and-white mollymawk with an estimated global population of 3 million individuals, making it the world’s most numerous 'albatross' species. About 70% breed at the Falkland Islands (Islas Malvinas) in colonies of up to 100,000 pairs. The New Zealand breeding population is tiny in comparison. Birds are often seen in Cook Strait and off Kaikoura Peninsula. After breeding, birds disperse widely around the Southern Ocean and into temperate seas in the South Pacific, South Atlantic and Indian Oceans.

Adult black-browed mollymawks have a white head and body contrasting strongly with dark grey to black upperwings, back and tail. The combination of prominent black eyebrow and black iris gives these birds a "frowning" appearance. The large yellow-orange hooked bill has a pinkish-red tip. In flight, the underwings show broad black margins that are wider on the leading edge with a wedge midway along protruding into the white central underwing. Immature birds have a pale grey wash on the crown extending to the breast, a less prominent black brow, and a dark grey underwing that lightens with age. Their greyish-green bill has a dark tip; the entire bill turns yellow-orange with age.

Voice: black-browed mollymawks grunt and cackle when quarrelling over food, and make belligerent two-tone braying calls and vibrating bill movements during displays at their breeding grounds.

Black-browed mollymawks are circumpolar colonial annual breeders at subantarctic islands including Antipodes Islands, Campbell Island and Snares Western Chain in New Zealand, and at Macquarie Island (Australia), Kerguelen and Crozet Islands (French Southern Lands), South Georgia and Falkland Islands (UK overseas territories) and Ildefonso Islands off southern Chile. After breeding, they disperse widely around the Southern Ocean and into temperate seas in the South Pacific, South Atlantic and Indian Oceans. They are often seen off the New Zealand coast, particularly in Cook Strait and off Kaikoura Peninsula, or following fishing boats, especially in winter. Some birds from Chile spend the non-breeding season off northern New Zealand. Very rarely an individual black-browed mollymawk reaches the northern hemisphere, where they have frequented Atlantic gannet colonies in Scotland and the Faroe Islands (Denmark). Hence, a mollymawk is referred to as a "king gannet" in Faroese.

The estimated global population is 3 million individuals, making it the world’s most numerous albatross species. About 70% of the birds breed at the Falkland Islands (Islas Malvinas), so the New Zealand breeding population is tiny in comparison. About 120 pairs breed at Bollons Island in the Antipodes Islands; c.20 pairs breed at Campbell Island, some of which interbreed with the related Campbell black-browed mollymawk; and one pair on Toru Islet, Western Chain, Snares Islands. There are recent indications of an increase in the numbers breeding at the Falkland Islands. Aerial and ground-based surveys in 2010 revealed an increase in population between 2005 and 2010 of at least 4% per year.

The black-browed mollymawk was reclassifed from Endangered to Near Threatened by the IUCN Red List in December 2013 because it was no longer estimated to be undergoing a very rapid population decline. Survey data from the Falkland Islands (Islas Malvinas), holding over 70% of the global population, showed population increases during the 2000s and possibly since the 1980s. However, there remains considerable uncertainty over population trends for a significant part of the global population and high levels of mortality are reported from longline and trawl fisheries in the South Atlantic. Birds are also frequently caught in long-line fisheries in New Zealand, Australia and South Africa, with mostly juvenile birds caught. This may account for the low recruitment rate at New Zealand colonies. It is reportedly caught less frequently in hoki and squid trawl fisheries. Birds sometimes eat plastic debris at sea, mistaking it for food. When plastic debris is regurgitated and fed to chicks they can die from starvation as a result of a blocked digestive tract.

Black-browed mollymawks breed at New Zealand subantarctic islands in colonies on grassy coastal cliffs or boulder slopes, from September to May. On Campbell Island they breed among mixed colonies of Campbell black-browed and grey-headed mollymawks; on Bollons Island they breed in a loose colony with white-capped mollymawks; and on rocky Toru Islet one pair breeds among Salvin’s mollymawks. Black-browed mollymawks perform aerial displays early in the breeding season. Courtship involves walking and bill-fencing. Black-browed mollymawks form monogamous, long-term pair bonds. A single large white egg with pinkish speckling is laid in September or October. The nest is bowl-shaped with sloping sides made from soil and grass, or guano and fish bones. The 70 day incubation and 130 day chick-rearing period are shared. Chicks are guarded for the first 15-34 days, and fledge in mid-April. The average age of first breeding is 10 years.

Black-browed mollymawks often feed noisily in flocks with other seabirds. On arriving at their nest, they fan their tail, lift their wings, point their bill toward the nest, and bray aggressively. A bird defending its territory cackles, vibrates its bill, exposes an orange skin-stripe on its cheeks, and stretches its head towards the ground. Adults and chicks sometimes squirt foul-smelling oily fluid secreted from their stomach through their mouth, or the whole stomach contents, if threatened at the nest. Campbell Island breeders alternate between short trips to continental shelf areas around the breeding site and long trips to the Polar Front.

Black-browed mollymawks mostly feed on fish, squid and krill caught at the sea surface or during shallow dives, often in the company of petrels and other mollymawks and albatrosses. They sometimes follow whales and dolphins, and have been recorded stealing fish from shags. Other prey items, such as seabirds (e.g. small petrels and terns), are taken occasionally either alive or as carrion found floating on the sea surface. Black-browed mollymawks also scavenge long-line baits and discarded fish offal while following fishing vessels, and at marine mammal carcasses found floating at sea.

A medium-sized black-and-white albatross with white head and body contrasting dark grey to black upperwings, back and tail, black eyebrow, black iris, large long yellow-orange hooked bill with pinkish-red tip. In flight, the underwings show broad black margins that are wider on the leading edge with a wedge midway along protruding into the white central underwing.

Adults at nest, adults and chicks of Campbell black-browed mollymawks in background