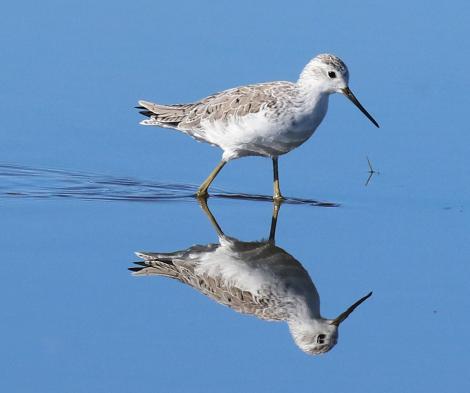 The marsh sandpiper is a medium-sized sandpiper, similar to a greenshank but more slender with a fine straight bill and long legs. In silhouette it looks like a small pied stilt. It breeds across central Asia and migrates to Africa and Australia. The marsh sandpiper is a regular visitor to New Zealand in very small numbers, usually singly with perhaps only one or two per year, although six were seen together at Miranda in 1998. Individuals often stay for extended periods.

Marsh sandpipers have relatively small bodies but their very long greenish legs and long fine straight bill make this species distinctive. In flight their dark wings without wing bars and a long white back and rump and a pale tail are also diagnostic although greenshank has similar markings but is considerably larger. They are generally grey above and white below in non-breeding plumage, with a small white eyebrow. In breeding plumage they are more streaked on the head, neck, back and breast.

Voice: when flushed, marsh sandpipers give a rapidly repeated loud ‘yip’ or a ‘plew’, similar to greenshank but higher pitched.

Similar species: in New Zealand, greenshank, which is considerably larger at 32 cm and 170 g, has a much heavier bill. Lesser yellowlegs is similar in size and structure but lacks the white back and has yellow legs. Juvenile pied stilts are darker on the back, with each feather fringed with buff; their attentive parents also remove confusion, although marsh sandpipers often associate with pied stilts.

Marsh sandpipers breed eastwards to Mongolia across central Asia, and formally bred in eastern Europe. After breeding they migrate to sub-Saharan Africa, India, parts of Southeast Asia and scattered coastal and inland locations in Australia. In New Zealand they are rarely seen away from the coast but prefer shallow freshwater or brackish lakes and pools rather than open mudflats. Marsh sandpipers are usually found with pied stilts in New Zealand and have been recorded at suitable sites from Northland to Southland, and occasionally on Chatham Island.

The estimated global population of marsh sandpipers is 260,000 - 1.2 million birds. As this species is very widespread, particularly in the non-breeding season, accurate counts are difficult to obtain. Numbers are probably decreasing, but the decline does not appear to be sufficiently rapid to be of immediate concern, hence it is classed as of Least Concern by IUCN.

Marsh sandpipers no longer breed in eastern Europe, Belarus, Moldova and western Russia due to agricultural intensification on the steppe habitat. Egg collecting may also have had an impact. High levels of pollutants have been recorded in their eggs in the Lake Baikal region of Russia. Staging habitat loss due to reclamation around the Yellow and Bohai Seas is a serious issue for this species on the East Asian-Australasian Flyway, as is unsustainable harvesting of benthic fauna and increasing pollution.

Marsh sandpipers breed around inland wetlands from boreal forest to open steppe, including shallow freshwater and brackish marshlands, river valleys, flooded meadows and occasionally salt-lakes. The nest is a shallow depression often on a mound at the edge of a lagoon or pool. It usually nests solitarily or in small colonies with pairs sometimes nesting less than 10 m apart. As with most sandpipers, chicks leave the nest soon after hatching and feed themselves on insects and other small invertebrates.

The marsh sandpiper is a medium to long distant migrant travelling overland in broad fronts between its breeding grounds and non-breeding grounds in sub-Saharan Africa, southern Asia, Indonesia and Australia. On the East Asian-Australasian Flyway this species passes through Mongolia, north-eastern and coastal China, Korea and Japan, to winter in Southeast Asia and Australia. Most pre-breeders stay on the non-breeding grounds or at intermediate sites during the breeding season. They often forage singly or in small groups although large flocks have been recorded in parts of coastal China, particularly the Bohai Sea during northward migration.

A relatively small-bodied wader with very long greenish legs, a long fine straight dark bill, generally grey plumage above and white below in non-breeding plumage, with a small white eyebrow. In flight, the dark wings have no wing bars, the long back and tump are white, and the tail is pale.