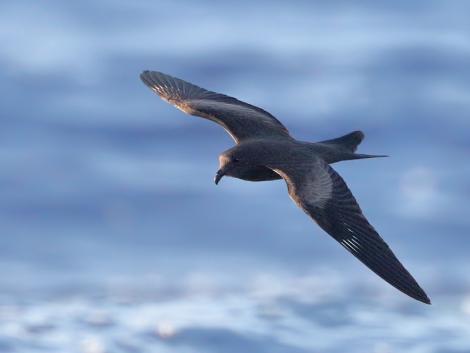 The decision of what scientific name to use for Matsudaira’s storm petrel is not straightforward. Nagamichi Kuroda proposed the name Oceanodroma melania matsudariæ in 1922, based on five specimens obtained by Viscount Yorikatsu Matsudaira (1876–1945), off the coast of Sagami Bay, Japan. Kuroda’s subspecific name was unconventional in two ways – he transposed the ‘i’ and ‘r’ in Matsudaira’s name, and he used a feminine ‘æ‘ suffix, rather than the expected masculine ‘i’. Kuroda was apparently familiar with the expected naming conventions, as only the previous year he had named a woodpecker from Miyakeshima, Japan, Yunipicus kizuki matsudairai, noting that the “subspecific name is in honor of Viscount Y. Matsudaira who kindly loaned me his series of specimens”. Most subsequent authorities have assumed that Kuroda made a lapsus calumi (slip of the pen) when he misspelt Matsudaira’s name, and have ‘corrected’ his storm petrel eponym to matsudairae, as permissible under Article 32.5.1 of the International Code of Zoological Nomenclature. However, in the 100 years since Kuroda named the bird, no-one has commented on why he used a feminine suffix. Was he honouring a female relative of Viscount Matsudaira’s?

Matsudaira’s storm petrel is a large dark storm petrel with long angular wings, broad buff brown crescents on the upper wings, a long forked tail, and a relatively long black bill. Distinct white shafts at the base the primary feathers on the upper wing give it a rather skua-like appearance, even at a distance. Strong, slow flight. Appears languid and often buoyant, mostly holding its long, forked tail closed. Foraging birds patter and land briefly on the water to feed, with wings raised.

Only known to breed on the Volcano Islands in southern Japan, where it breeds on Minami-Iwo-Jima, and perhaps formerly on Kita-Iwo-Jima. Also recorded around the Ogasawara Islands and so is assumed to breed there, but this requires confirmation. After the breeding season, it is thought to migrate south across the equator, perhaps to the Timor Sea off north-west Australia, and then west into the Indian Ocean, where it winters mostly in the equatorial belt around the Seychelles and west to east Africa. Some birds may winter off north-east New Guinea.

The first and only New Zealand record was found beach-wrecked on Maukatia Bay (south of Muriwai), Auckland west coast, on 27 May 2022.

Reported to be locally common in its breeding range. Its reported abundance in the Indian Ocean suggests the global population numbers a minimum of 20,000 individuals. The population trend is difficult to determine because of uncertainty over the main threats to the species.

This species has been assessed as Vulnerable on the IUCN Red List on the basis that it occupies a tiny range when breeding, probably on just two islands, and is therefore susceptible to stochastic events and the impacts of human activities.

Rats (Rattus rattus) became established on Kita-Iwo-Jima around the time of the Second World War, and are considered to have caused local extinctions. There do not appear to be any breeding records of Matsudaira's storm petrel from the island in recent decades. Rats are likely to be causing continuing mortality to birds attempting to nest on the island. There is a real risk of rat introduction to Minami-Iwo-Jima, which would likely have devastating consequences.

Breeds January–July in colonies on Minami-Iwo-Jima.

It is colonial, nesting in burrows on high ground. Breeding is thought to begin in January, with most fledging taking place in June. In the non-breeding season it is generally pelagic, occurring far from the coast.

Feeds on planktonic crustaceans and small fish picked from the sea surface.