Geographical variation: At least 4 subspecies. New Zealand birds are the nominate race N.n. novaeseelandiae; N.n. boobook is common in Australia, where it is known as the boobook owl; N.n. albaria of Lord Howe Island is extinct; N.n. undulata of Norfolk Island is also extinct, surviving only as a hybrid population (with N.n. novaeseelandiae) 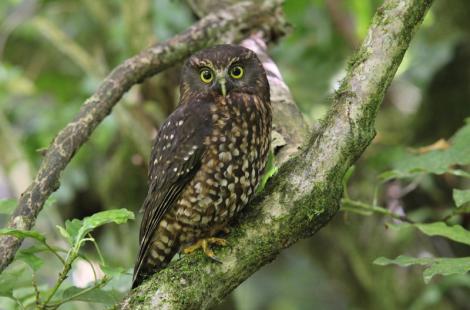 The morepork is a small, dark, forest-dwelling owl. Found in both native and plantation forests, its distinctive “more-pork” call is commonly heard at night in many urban parks and well-vegetated suburbs. Moreporks are relatively common throughout much of New Zealand but are sparse through the eastern and central South Island. Their diet consists of insects, small mammals and birds, which it hunts at night.

The morepork is a small, compact, dark-brown owl. Its striking yellow to yellowish-green eyes are set into two facial disks either side of a small sharply hooked bill. The back feathers are dark-brown spotted sparsely with off-white. The breast is dark-brown variably streaked with cream and brown through to rufous. The legs are feathered legs down to the yellow feet.

Voice: Calls are given almost exclusively at night. The onomatopoeic ‘more-pork’ call is the most characteristic and often heard call. They also utter a repetitive ‘quork-quork’, a rising ‘quee’ call often confused with kiwi, and a yelping call similar to the short call of little owl.

Similar species: little owls are the only other small species of owl in New Zealand. They are paler than morepork, more grey-brown than dark-brown, and heavily spotted and streaked with cream. They are found only in open habitats in South Island, with minimal range overlap with morepork. The rising ‘quee’ call is often mistaken for a kiwi call.

Moreporks are widely distributed throughout the native and exotic forests of New Zealand. They are uncommon in the drier eastern regions of the South Island, especially south of Christchurch. They also occur in more open areas where suitable patches of vegetation remain including sparsely-wooded farmland, and within some urban parks and gardens. Moreporks inhabit most forested offshore islands from the Three Kings Islands south to some of the muttonbird islands off the south-west tip of Stewart Island. They are naturally absent from the Poor Knights Islands and Chatham Islands, and vagrant to the Snares Islands. Moreporks roost in dark forested areas with high overhead cover, on a branch, on top of a tree fern or within a cavity. They sometimes roost inside derelict buildings.

Prone to predation when nesting, by cats, possum, rats and mustelids. When nesting on the ground eggs and chicks may also be susceptible to predation by pigs and hedgehogs. Sex bias towards males recorded in the Eglington Valley suggests that females may be vulnerable to predation when incubating and brooding in cavities. Low productivity was recorded in studies in the Eglington Valley (Fiordland) and on Ponui Island (Hauraki Gulf), but the causes are unclear. Moreporks are vulnerable to secondary poisoning from pest control operations using brodifacoum poison. Morepork diet is related to prey abundance, suggesting that the risk of secondary poisoning could be reduced by conducting pest animal control operations at times of year when moreporks are not targeting rodents.

Moreporks breed readily in captivity. Two captive males from New Zealand were released on Norfolk Island in 1987 to provide a mate for the last surviving Norfolk Island boobook owl. This was successful, and the pair produced several young before the female died in the mid 1990s. A hybrid morepork/boobook population persists on Norfolk Island as a result.

Moreporks breed in spring and summer. Nests are usually placed within cavities of live or dead trees, within broken logs, in a tree fork or within a hole in an earth bank, including in petrel burrows. They also nest in epiphytes, in nest boxes put up for other species, or in a simple scrape on the ground under tree fern fronds, a rock, or among the roots of trees - anywhere that provides a dark hideaway. The 1-3 eggs are incubated by the female only. Incubation takes about 25 days, and chicks fledge when about 7 weeks old. Both adults feed the young.

The morepork has short, broad wings making it very manoeuvrable and able to fly through dense forest. Like other owls it has serrated or comb like edges to its flight feathers that reduce air turbulence over the wing, enabling silent flight. Moreporks are most often seen when they approach street lights or lights on the outside of buildings, to hunt moths that are attracted to the light. They commonly fly into windows, and are often hit by vehicles. Moreporks strongly defend a territory of 3.5 to 7.8 ha. Birds that appear to be calling together in a ‘duet’ are usually rival males duelling.

Moreporks catch and consume a wide variety of small animals, including large insects, small birds, (especially silvereyes), and small mammals. The diet varies with season, generally in proportion to abundance of prey species. Insects taken include huhu beetles, weta, cicadas and large moths. Indigestible material are ejected through the mouth as a pellet.

A small, dark brown owl of forests and forest remnants, including in suburbs. Most often detected by its characteristic 'morepork' or 'ruru' call, moreporks have a range of other calls often confused with kiwi ('cree') and little owl ('yelp').

Variety of calls in one sequence

Variety of calls in one sequence