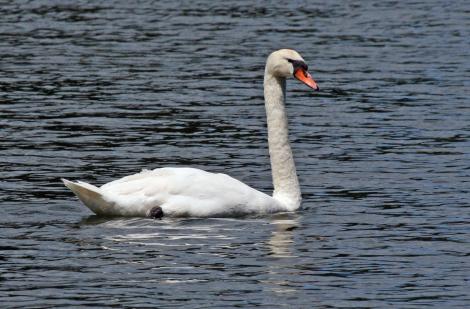 The mute swan was introduced to New Zealand during the 19th century as an ornamental species both privately and for municipal parks and public ponds and lakes. According to Acclimatisation Society records, there were four releases to the following regions; Canterbury (1866), Otago (1868-69), Auckland (1869, by Sir George Grey, and again in 1871). The mute swan is monotypic with no subspecies. Its closest relative is the Australasian black swan.

The mute swan is a large, entirely white swan. There is no sexual dimorphism in plumage, but females are smaller. In striking comparison to the white body plumage are the bright orange-red bill and wedge-like black mask and knob of the upper mandible. The mask extends back to a point in front of the eye. The bill knob is larger in the male. The mute swan is one of the largest flying birds and it limits its flying to migration and movement between suitable habitat. It spends most of its time floating on the water surface where it uses its long neck to feed on submerged water plants. Some young cygnets are born with white down, but the most common colours range from grey to buff.

The natural range for the mute swan is throughout northern Eurasia to eastern Europe. It also extends into temperate areas of Asia. It migrates through northern Europe and occasionally to North Africa and the Mediterranean. Introduced to the USA, southern Africa, Australia and New Zealand. In New Zealand, wild mute swans are found in Canterbury and Hawkes Bay, with a few other small semi-feral populations near where they have been released. Its preferred habitat is lakes and ponds of still and slow moving water. They feed on the vegetation of water margins and shallow lake beds. Mute swans build large raised nests in shallow water close to the margins of lakes and ponds. They have a strong pair bond and reuse nests.

The mute swan has a wide distribution in the northern hemisphere, with the largest breeding populations in the countries of the former Soviet Union (350,000 birds), Volga Delta (11,000 pairs), United Kingdom (22,000 birds) and Germany (8,000 pairs). Introduced mute swans bred rapidly in the USA and are now considered an invasive species. Although very small, wild populations have established in New Zealand at Lake Ellesmere (80 birds) and Hawkes Bay (20 birds). Some semi-feral populations exist in municipal gardens such as Virginia Lake, Whanganui.

Until 2010, mute swans had absolute protection under the Wildlife Act 1953. This total protection has now been lifted. It can now be culled or held in captivity at the discretion of the Minister of Conservation. However, there have been no incidences of populations becoming invasive or destructive as in the USA. The contrary situation exists with the mute swan populations in New Zealand declining owing to predation and outbreaks of botulism.

A large all-white swan with a bright orange-red bill, a wedge-like black mask from the eye to the bill, and a black knob on the upper mandible. Males are larger than females and have a larger knob on the bill.