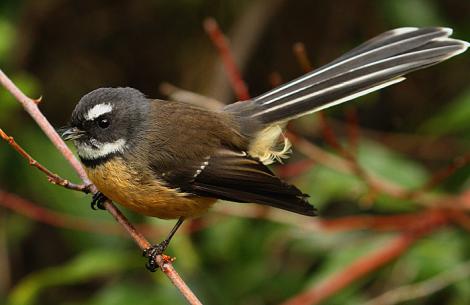 The fantail is one of New Zealand’s best known birds, with its distinctive fanned tail and loud song, and particularly because it often approaches within a metre or two of people. Its wide distribution and habitat preferences, including frequenting well-treed urban parks and gardens, means that most people encounter fantails occasionally. They can be quite confiding, continuing to nest build or visit their nestlings with food when people watch quietly. There are two colour forms or ‘morphs’ of fantail, with the more common pied morph occurring throughout its range, and the black morph comprising up to 5% of the South Island population, and occasionally occurring in the North Island.

The New Zealand fantail occurs in two colour morphs: pied and black. The adult pied fantail has a greyish head, prominent white eyebrows, brown back and rump, cinnamon breast and belly, white and black bands across the upper breast, and a long black and white tail. Juvenile pied fantails are of mainly brown tones over the head and body, lack the striking white eyebrows and chest bands, and are more rufous on the breast, eyebrows and on the tips of the primary coverts than adults. Black fantails are mainly black, with black-brown over the rump, belly and flight feathers, and occasionally have a white spot over each ear. Note that black morph fantails never have white on their tail feathers. Juvenile black fantails tend to be more dark brown than black. Black fantails are rare in the North Island, and make up less than 5% of individuals across the South Island. The main difference between the subspecies is the amount of white in the tail (North Island fantail with slightly greyish inner webs, South Island pied morph white inner webs, Chatham Island fantail with more extensive white). Fantails are occasionally seen without tails!

Voice: fantails are quite vocal, except when it is particularly cold. They regularly give ‘cheep’ calls in a number of situations, such as when foraging or alarmed. The species’ distinctive song has been described as “a chattering tweeta-tweeta-tweeta…. of regular rhythm”, and of high pitch. It can be heard throughout the year, particularly during the breeding season (August-March), but least of all during cold, wet days of winter.

Similar species: the New Zealand fantail is the only resident fantail in New Zealand and so is unlikely to be confused with any other species. The related willie wagtail has reached New Zealand on one occasion.

Fantails occur widely from Northland to Stewart Island, and on some islands of the Chathams group (Chatham, Pitt, Rangatira, Mangere, Little Mangere). They colonised the Snares group during 1977-81, but disappeared during a severe storm in 2001.

The widespread distribution of the fantail can be attributed to its utilisation of a wide variety of habitats, including both native and exotic forest and shrubland habitats. It is widespread in extensive native forest blocks, small forest patches, scrubland, exotic plantations, farm shelterbelts, orchards, and well-treed suburban parks and gardens.

The New Zealand fantail is widespread and can be locally common, especially following the breeding season when small flocks form. However, local populations and those on small islands can disappear or reduce in numbers dramatically during prolonged cold and wet weather. In line with population declines in severe weather, fantails tend to be scarce or non-existent in open country that experiences extreme frosts and snow, such as inland Marlborough and central Otago. In suitable habitat, populations usually recover within a year or two due to the species’ high breeding productivity and extensive juvenile dispersal.

The fantail is one of the few native forest bird species that has coped reasonably well with the extensive conversion of lowland native forest to farmland. However, nesting adults, eggs and chicks are not immune from being preyed upon by introduced mammalian pests, particularly by ship rats.

The timing of fantail breeding varies with location and weather conditions. Those at southern localities (Southland) and offshore islands (Chathams) have shorter breeding seasons than those further north. The nest is constructed of fine materials (mosses, dried rotten wood fibres, hair, dried grasses, fern scales) tightly woven with cobwebs. Most nests are sheltered from above by foliage, and often include a ‘tail’ of material below the base of the nest. Two to five eggs are laid, with both adults taking turns on the nest through the approximately 14-day incubation period. Likewise, both male and female brood and feed the young during the approximately 14-day nestling period. Recent fledglings have short tails and often remain together, often perched side by side. The male looks after the fledglings when the female starts building the next nest. One monitored pair reared five broods in a season, totalling 15 fledglings.

During the breeding season fantails are territorial, chasing interlopers away with harsh chattering calls. While adults remain on or near their territories in the non-breeding season, juveniles occasionally gather in loose flocks where prey is readily available. During fine, warm weather fantails forage from the understorey to the canopy, and even above the canopy. They can often be found associating with flocks of other forest species, such as brown creepers, whiteheads and silvereyes, perching below ready to intercept any prey that falls. They have a strong association with foraging saddlebacks wherever the two species co-occur. When searching for prey in foliage, fantails often flick their wings and fan their tails, presumably to frighten hidden prey into movement so that they can be detected. During cold spells in winter they can be seen moving about on the ground in search of food. Given their small size and vulnerability to cold weather, it is not surprising that they occasionally roost communally, perched tightly together in a sheltered cavity, including inside sheds and garages.

Fantails mainly eat small invertebrates, such as moths, flies, beetles and spiders. Large prey is subdued by being held in a foot against a perch and then being repeatedly pecked. Indigestible portions, such as wings, are often discarded before the remainder is eaten. Small fruit are sometimes eaten.

A small songbird with greyish head, white eyebrows, brown back and rump, cinnamon breast and belly, white and black bands across the upper breast, and a long black and white tail. Five percent of South Island birds are mainly black with black-brown over the rump, belly and flight feathers, and sometimes have a white spot over each ear.