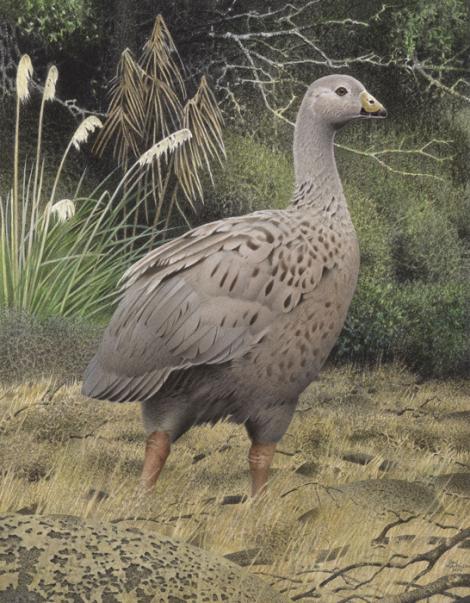 The North Island goose was large. At 15 kg and standing a metre tall, it would have been as large as some of the smaller species of moa. It was terrestrial, flightless and had short wings and a shortened tail.

North Island geese were restricted to open country and forest margins, including grassland, dunelands, coastal margins and dry eastern areas. They were probably most widespread during the Pleistocene ice ages, with their distribution contracting as temperatures increased and forested areas became more widespread.

North Island geese were not widespread, and the fossil record indicates that they were not abundant, probably due to the limited extent of their preferred grassland habitats.

Like the various moa species, the North Island goose would have been an easy target for early Polynesian hunters. It became extinct soon after Polynesians arrived.

The North Island goose is likely to have grazed on grasses and herbs.

A large terrestrial goose similar to Cape Barren goose but flightless, with short wings and a shortened tail. It weighed up to 15 kg and stood up to a metre tall, as large as the smaller moa species and markedly lighter than the closely-related South Island goose.