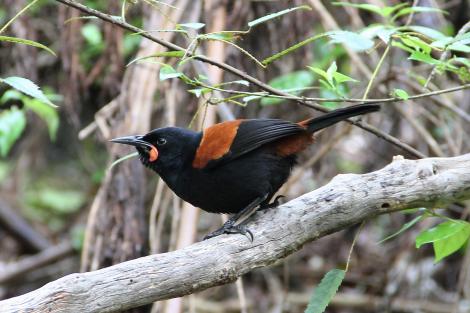 North Island saddlebacks are conspicuous and easily observed in regenerating scrub, forests and coastal forests. They call frequently, particularly in response to disturbance, and are very active, noisy foragers. They are about the size of a European blackbird. Saddlebacks were widespread at European contact, but rapidly declined on the mainland following the introduction of predatory mammals, especially ship rats and stoats. By the early 1900s, North Island saddlebacks were confined to a single population on Hen Island (Taranga) off the northeast coast of the North Island. A series of successful translocations was initiated by the New Zealand Wildlife Service in the 1960s. There are now 18 island populations, including the natural population on Hen Island, a population established through natural dispersal on Coppermine Island, and 16 translocated island populations, plus another six at predator-fenced mainland sites.

Voice: a loud chattering call cheet te-te-te-te is uttered throughout the day. Territorial male birds sing male rhythmical song which is characterised by 2-4 introductory chips followed by a series of highly stereotyped and repeated phrases. Over 200 different types of male rhythmical song have been recorded, with song diversity and distribution correlating with translocation history. Male and female birds also give sexually dimorphic quiet calls which are very soft and flute like.

Cavity-roosting and nesting behaviour makes North Island saddlebacks extremely vulnerable to predation by introduced mammals, especially stoats. Therefore, they can only exist at sites where exotic mammalian pests are either completely excluded or are at zero density. Translocation has been essential for the conservation management of North Island saddlebacks (see Distribution).