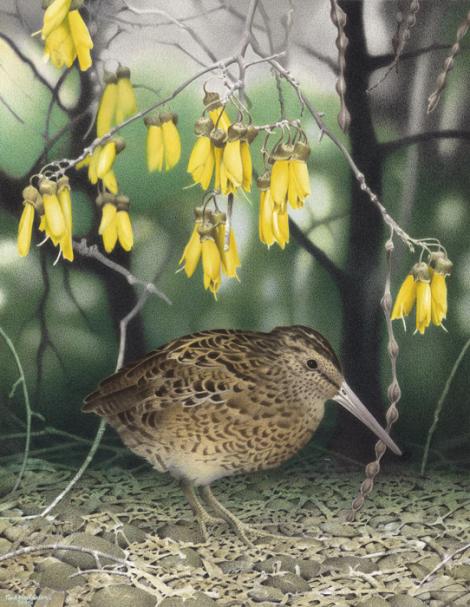 This small snipe is known from a single specimen collected on Little Barrier Island by Captain Bennett of the schooner Mary Ann in about 1870. It was apparently one of two birds seen. More recently, subfossil bones have been found at scattered locations throughout the North Island. The single specimen was acquired by the Auckland Museum in 1870, but details of its collection became confused with a specimen of subantarctic snipe. W.R.B. Oliver identified the latter specimen as an Auckland Island snipe, and then named the smaller bird as a new subspecies in 1955. Based on plumage differences and proportions of major limb bones, the North Island snipe is currently regarded as a full species. This has yet to be confirmed by genetic comparisons with other Coenocorypha snipe taxa.

The North Island snipe was one of six species in the genus Coenocorypha from New Zealand, of which three became extinct following human contact. Outside New Zealand, Coenocorypha snipe also occurred in Fiji, on Norfolk Island, and in New Caledonia. These three forms are also extinct, and are known from a few subfossil bones.

A small, richly patterned snipe with 4 cm-long bill and short legs, wings and tail. The North Island snipe differed from the South Island snipe in having a larger area of buff-white on the chin and throat, and finer, lighter markings on the feathers of the breast and belly.

Originally throughout the North Island. Bones have been found in a sand dune deposit in Northland, caves deposits in the King Country, Hawkes Bay and Wairarapa, and in a lake-bed deposit in Hawkes Bay. Since European contact, the only records were a possible sighting on Motukorea (Browns Island) in the inner Hauraki Gulf in 1820, and the 1870 specimen from Little Barrier Island. Nothing is known about habitat requirements, other than the cave deposition sites were all likely to have been surrounded by forest.

Snipe on the North Island were probably extirpated by Pacific rats (kiore) introduced by Maori. The fact that snipe apparently survived on Little Barrier Island in the presence of Pacific rats until at least 1870 suggests that the rats had not been on the island long enough to eliminate all individuals of species vulnerable to rat predation. Feral cats became established on Little Barrier Island soon after 1870, and are likely to have killed any remaining snipe there.