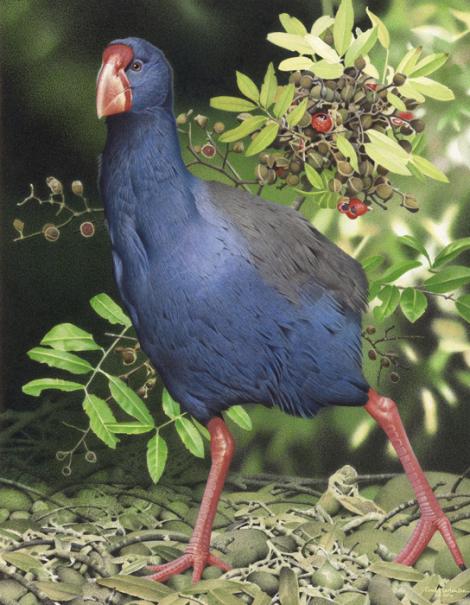 There is much mystery, intrigue and mana surrounding the North Island takahe or moho. It was described in 1848 by the anatomist Richard Owen at the British Museum, based on bones collected near the Waingongoro River mouth, South Taranaki the previous year by Walter Mantell (1820-95). Owen coined the genus name Notornis (Greek for ‘southern bird’) for the specimens, which were assumed to be of an extinct species. This name, through twists of fate, was to be the inspiration for the names of both the journal of the Ornithological Society of New Zealand (Notornis) in 1950, and also for the magazine of the Society, which was called Southern Bird from 2000 to 2013.

One year after Owen named the North Island bird, the scientific community was astounded by the discovery of what is now called the South Island takahe, at Dusky Sound, Fiordland. The skin was secured by Walter Mantell, no less, and was described by his father, Dr Gideon Mantell (1790-1852), at a meeting of the Zoological Society in London in 1850. Gideon Mantell’s major claim to fame is as the discoverer of the world’s first dinosaur – Iguanodon – in 1822. It is through the unlikely connection of the elder Mantell having a naturalist son based in New Zealand at the time of his death, that the world’s first dinosaur fossil – an Iguanodon tooth – ended up in the collection of the Colonial Museum (now Te Papa).

For the next 147 years, the South Island takahe was considered the living embodiment of the bones that Walter Mantell had found in Taranaki. This was, perhaps, a unique set of circumstances, where a living bird was called by a name (Notornis mantelli) originally assigned to fossil bones. The South Island takahe was to acquire further fame, as three further specimens only were secured before its apparent extinction in 1898, only for it to be sensationally rediscovered in the Murchison Mountains by Dr Geoffrey Orbell in November 1948. This rediscovery thrust the Notornis into the international spotlight a mere 5 years after a fledgling Ornithological Society of New Zealand had published the first issue of its journal under the name N.Z. Bird Notes. A resolution to change the journal name to Notornis was passed at the AGM in Wellington on 19 May 1949.

New Zealand ornithologists continued to use the genus name Notornis through to 1990, and the North and South Island birds were regarded as being conspecific until the relationships of the two takahe were reviewed by Steve Trewick in 1996. It is only since then that the North Island takahe has been widely accepted as being a full species, distinct from the South Island takahe, with the northern bird still bearing Walter Mantell’s name.

As this tale unfolded, there was a subplot developing in the North Island. In the autumn of 1894, the surveyor Morgan Carkeek is reported to have caught an unfamiliar, large blue bird in the northern Ruahine Range. The skin was delivered to the home of Mr Roderick McDonald of Horowhenua, where it caused great excitement among older Maori, who recognised the bird as being “the rarely seen Mohoau”. The specimen (which no longer exists) is tentatively regarded as having been a North Island takahe, the only one known to have been seen by Europeans.

Morphometric analyses of bones indicate that the North Island takahe was taller than its South Island counterpart, and was more similar in shape to a pukeko, though substantially larger at 3 kg (cf. about 1 kg for a pukeko).

Mantell, G.A. 1851. Notice of the discovery by Mr. Walter Mantell in the Middle Island of New Zealand of a living specimen of Notornis, a bird of the rail family, allied to Brachypteryx, and hitherto unknown to naturalists except in a fossil state. Proceedings of the Zoological Society of London 4: 209-212.

Owen, R. 1848. On Dinornis (Part III): containing a description of the skull and beak of that genus, and of the same characteristic parts of Palapteryx, and of two other genera of birds, Notornis and Nestor, forming part of an extensive collection of ornithic remains discovered by Mr Walter Mantell at Waingongoro, North Island of New Zealand. Transactions of the Zoological Society of London 3: 345-378, pls 52-56.

Trewick, S.A. 1997. Flightlessness and phylogeny amongst endemic rails (Aves: Rallidae) of the New Zealand region. Philosophical Transactions of the Royal Society, London B 352: 429-446.

A very large extinct flightless species of rail taller than the South Island takahē and more similar in shape to a pukeko, though substantially larger at 3 kg compared to the 1 kg pukeko.