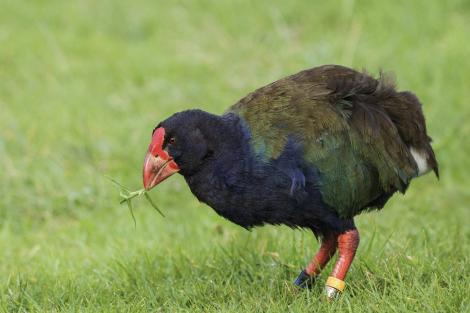 The South Island takahē is a rare relict of the flightless, vegetarian bird fauna which once ranged New Zealand. Four specimens were collected from Fiordland between 1849 and 1898, after which takahē were considered to be extinct until famously rediscovered in the Murchison Mountains, west of Lake Te Anau, in 1948. Until the 1980s, takahē were confined in the wild to the Murchison Mountains. They have since been translocated to seven islands and several mainland sites, making them more accessible to many New Zealanders. Conservation work by the Department Of Conservation and community groups aims to prevent extinction and restore takahē to sites throughout their original range. The success of DOC’s Takahē Recovery Programme relies heavily on a partnership with Mitre 10 who through Mitre 10 Takahē Rescue is helping to ensure the long-term survival of this treasured species.

The South Island takahē is the largest living rail in the world. An enormous gallinule, it has deep blue on the head, neck and underparts, olive green on the wings and back, and a white undertail, The huge conical bill is bright red, paler towards the tip, and extends on to the forehead as a red frontal shield. The stout legs are red, with orange underneath. Juveniles are duller with a blackish-orange beak and dull pink-brown legs.

Voice: the main calls of takahē are a loud shriek, a quiet hooting contact call, and a muted boom indicating alarm.

South Island takahē originally occurred throughout the South Island. Hunting, predation and habitat loss resulted in a remnant population in the mountains of Fiordland. The modern conservation programme has set up additional populations; a captive breeding and rearing facility at Burwood Bush near Te Anau, plus free-ranging populations on wildlife reserves in the North and South Island and several offshore islands including Tiritiri Matangi and Motutapu (Hauraki Gulf), Kapiti and Mana (Wellington) and Maud (Marlborough Sounds).

Takahē inhabit grasslands predominantly, using shrubs for shelter. In Fiordland, alpine tussock grasslands and the red tussock river flats are preferred. When winter snow covers these areas, birds move into adjacent beech forest. At other sites the vegetation is regenerating farm pasture in various stages of reversion to mixed native lowland forest. Some now have substantial forested areas. At these sites takahē prefer the grassland areas with scattered shrubs, although they do spend some time under forest.

The South Island takahē population in 2011-12 was approximately 276 birds, with ~110 in Fiordland, ~107 at restoration sites, 11 at captive display sites, and 48 at the captive breeding site.

Natural hazards influencing the Fiordland takahē population include avalanches and cold climate. Modern threats include predation by introduced stoats, and competition for food from introduced red deer. Deer numbers have been controlled to low levels since 1980, allowing tussock grasslands to slowly recover their original size and nutrients. Stoat predation impact is relatively low in most years but when environmental conditions conspire, stoat populations increase significantly, and have greater impact on takahē survival. The Fiordland takahē population is under a recently extended stoat trapping programme.

From 1986 - 2009, takahē in Fiordland were managed by captive-rearing wild eggs, releasing yearlings back into the wild. Artificial incubation and puppet-rearing were used to maximise productivity. From 1986-1991, yearlings were released outside of the source population in an attempt to extend the range. From 1991-2009 there was a change to releasing among the source population which improved survival of released birds.

Numbers on island/mainland reserves are managed by the removal of surplus young. This activity both limits population density to a suitable level and avoids inbreeding by mixing genetic lines between different sites. At the captive breeding facility, puppet rearing is redundant and artificial incubation is minimised. Instead, the enlarged breeding group is intensively managed through egg and chick fostering, ensuring each pair is laying, incubating good eggs or raising chicks. Genetic lines are managed to ensure none is over-represented.

Takahē in Fiordland lay late October-January. In the lower altitude sites nesting begins in September. One to three eggs (usually two) are laid two days apart; male and female share incubation and chick rearing equally. Eggs are pale buff colour with reddish-purplish blotches (c. 74 x 48 mm, and 95 g when fresh). Incubation takes 30 days, with chicks hatching two days apart. Chicks stay in the nest for about a week, as they become stronger they climb out and follow their parents begging for food. Chicks are brooded in the nest in cold or wet weather. Parents provide tussock shoots for the chicks with the tougher outer leaves peeled off. Parents move the family to access a fresh feeding area as soon as the chicks are able, repeating as necessary. If the first clutch fails, takahē may lay a second. They can lay a third in an intensively managed situation.

Takahē live in pairs or small family groups. Young stay with parents until just before the next breeding season, or stay for a second year. Unusual cases of breeding trios or greater (two females laying) have been observed. Pairs defend their breeding territory by calling, or fighting if necessary, returning to the same areas each year.

Fiordland takahē feed mainly on leaf bases of tussock grasses (Chionochloa spp). Sedges (Uncinia spp, Carex coriacea), rushes (Juncus spp) and Aciphylla spp are sometimes taken. Smaller grasses are grazed from the tips down, this being the staple on islands and lowland reserves. When available, grass seeds are stripped from the stem while still attached. In Fiordland winter (forest) habitat, alternative carbohydrate is found by grubbing starchy rhizomes of a fern Hypolepis millefolium and the rhizomes of the sedge Carex coriacea. In other sites the diet does not vary as much seasonally - pasture grasses are available all year round. Takahē opportunistically take a protein in the form of large insects (moths, beetles, weta), or very rarely will take ducklings or lizards.

This is the largest living (flightless) species of rail in the world, which has deep blue on the head, neck and underparts, olive green on the wings and back, and a white undertail. The huge conical bill is bright red, paler towards the tip, and extends on to the forehead as a red frontal shield, and the stout legs are red with orange underneath.

Calls of 2 birds feeding together in forest

Duet calling by captive pair (parakeet and traffic in background)