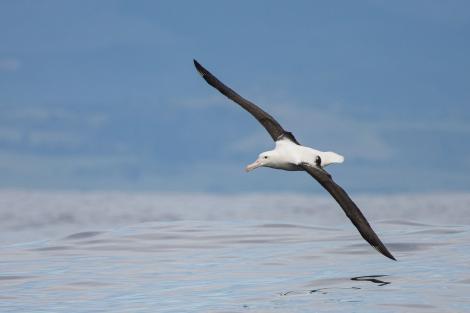 The northern royal albatross is a huge white albatross with black upperwings. It usually mates for life and breeds only in New Zealand. Biennial breeding takes place primarily on The Sisters and The Forty-Fours Islands in the Chatham Islands. There is also a tiny colony at Taiaroa Head near Dunedin on the mainland of New Zealand, which is a major tourist attraction.

Northern royal albatross can be sighted throughout the Southern Ocean at any time of the year. Non-breeding and immature birds, including newly fledged birds, undertake a downwind circumnavigation in the Southern Ocean. The main wintering grounds are off the coasts of southern South America. They are generally solitary foragers and forage predominantly over continental shelves to shelf edges.

The northern royal albatross has a white body including the mantle, unlike smaller albatrosses referred to as mollymawks (which have dark backs). The head is white though a small number of females may show some black speckling on the crown. The wings are long and narrow with black upperwings and white underwings apart from a black leading edge between the carpal joint and wingtip. The white tail feathers are occasionally tipped in black. The heavily hooked bill is pale pink with a black cutting edge on the upper mandible. The legs and large webbed feet are a flesh colour. The bill and tarsus are darker pink when rearing chicks. Males are somewhat larger than females.

Voice: northern royal albatrosses are usually silent at sea, but they may produce some croaking and gurgling sound when feeding around vessels.

When not breeding, northern royal albatrosses range widely throughout the Southern Ocean, though rarely into Antarctic waters. The breeding range is restricted to the Chatham Islands (Forty-Fours, Big and Little Sister Islands) and Taiaroa Head on the Otago Peninsula. Hybridisation with southern royal albatross on Enderby Island, Auckland Islands (and at Taiaroa Head) has been recorded. While breeding, they generally forage over the Chatham Rise, and are less common farther north than East Cape, North Island. The majority of the population spends their non-breeding period off both coasts of southern South America, especially over the continental shelf and slope off Chile, and the Patagonian shelf off Argentina.

The total breeding population in the Chatham Islands colonies (99% of the total) is estimated at c. 6,500-7,000 pairs, with c. 5,200-5,800 pairs breeding each year. This number roughly equates to a total population of 17,000 mature individuals. Nearly 30 pairs breed each year at Taiaroa Head which supports 1% of the population. Although the Taiaroa Head colony is increasing, the trend for the overall population remains unknown due to the lack of recent data from the Chatham Islands.

Habitat change on the breeding colonies due to storms and climatic changes could be the present major threat to the species. Breeding success in the Chatham Island colonies reduced significantly as a result of a large storm in 1985 that caused loss of soil and vegetation. Since the mid-1970s, both the Chatham Islands and Taiaroa Head colonies have experienced warming and drying of habitat. More recently, the Taiaroa Head colony has been subject to egg and chick failure due to heat stress and infestation by an introduced blowfly. Historically, the birds were harvested in the Chatham Islands by local residents, and this may still occur occasionally. There are no introduced mammals on the small islands where northern royal albatrosses breed within the Chatham Islands. At Taiaroa Head, vandalism of nests and eggs occurred before 1937, and predation of chicks by introduced mammals was recorded in some years. Fishery-related mortality is not considered a significant issue, although a few birds have been reported killed.

The populations on the Chatham Islands have been monitored mainly by means of aerial photographs. Monitoring of the Taiaroa Head population has been undertaken since 1937. Introduced mammalian predators have been intensively controlled at and in the vicinity of Taiaroa Head. A sprinkler system has been installed at Taiaroa Head to cool nesting birds on particularly hot days. Also, an incubator and a fly repellent have been used to reduce the risk of blow fly infestation.

Northern royal albatrosses have long-term monogamous pair-bonds, with shared incubation and chick-rearing duties. They nest in colonies and breed biennially if successful in rearing a chick. A breeding cycle takes almost a whole year to complete, with the single egg laid in late October to late November. Hatching takes place between late January and early February after about 79 days of incubation. The chick is brooded for c.34 days and then guarded for 6 more days. Chicks fledge at the age of about 240 days in September. Juvenile birds return to colonies when 3-4 years old. The average age of first breeding is 8 years.

Normally known as solitary foragers, northern royal albatrosses may congregate at food sources at sea. Unlike other albatrosses, they are not a keen vessel follower. They are surface feeders and scavengers. Most of their food is thought to be obtained by seizing dead or dying prey from the surface and also by scavenging discards and offal from fishing boats. They can dip the head and neck to one metre depth. When breeding, birds forage over the continental shelves to shelf edges in New Zealand waters. Non-breeding and young birds can be found anywhere in the Southern Ocean throughout the year, with the main wintering areas off the coasts of southern South America.

Northern royal albatrosses mainly feed on squid and other cephalopods, along with fish, crustaceans, and salps. One interesting fact is that about one-third of the cephalopods eaten by albatrosses at Taiaroa Head are bottom-dwelling octopuses – presumably after they are discarded following their capture in crayfish pots and other benthic fishing equipment.

A large white-bodied albatross with pale pink bill with black cutting edge on the upper mandible, and flesh-coloured legs and feet; white tail feathers are occasionally tipped black and a small number of females may show black speckling on the crown. The wings are long and narrow with black upperwings and white underwings apart from a black leading edge between the carpal joint and wingtip.

Female calls whilst laying an egg