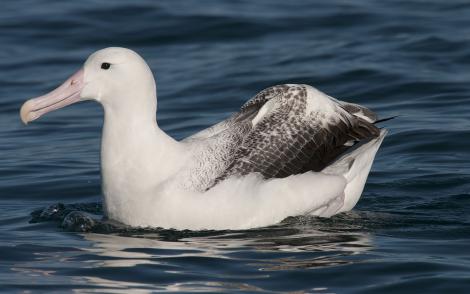 The southern royal albatross (toroa) is one of the great albatross species, with a wing-span in excess of 3 m and weighing approximately 9 kg. Endemic to New Zealand, the majority of the southern royal breeding population is found on subantarctic Campbell Island, with smaller numbers on the Auckland Islands. Birds breed biennially as it takes nearly a year to rear the single chick. Non-breeding birds and juveniles cross the Southern Ocean to feed in South American waters before returning to the breeding areas by circumnavigating the globe. Young birds begin returning to the islands at 3-4 years of age to find mates, and generally start breeding at 6-12 years, and live into their 40s. Southern royals are closely related to the northern royal albatross, which breeds at Taiaroa Head and the Chatham Islands.

The southern royal albatross is the largest of the albatrosses, rivalled only by the true wandering albatross. It has a white body and black wings and white tail. The leading edge of the inner upper wing becomes whiter with age, especially in males. The robust bill is light pink with a creamy tip and with a black cutting edge to the upper mandible. Juveniles have blacker wings than adults and white bodies with black flecking on the back, flanks, crown and tail.

Voice: the ‘sky-call’, a high-pitched screaming bray, is given during displays by socializing birds (courting birds, breeders and gatherings of immature birds known as ‘gams’). Displays may culminate in yapping or clucking.

Over 99% of the southern royal albatross population breeds on Campbell Island, and a small proportion on the Auckland Islands (Enderby, Adams and Auckland), with a few birds apparently hybridising with northern royal albatrosses at Taiaroa Head. On Campbell Island, nests are scattered amongst tussock grasslands and megaherb fields at mid-elevation (180-350 m). Birds forage over the continental shelf and inner slope of southern New Zealand and the Campbell plateau, southern Chile, Uruguay and Argentina where they scavenge for squid and fish.

Approximately 8500 pairs of southern royal albatross breed each year on Campbell Island and <100 pairs on the Auckland Islands.

Southern royal albatrosses on Enderby Island were extirpated by humans in the 1800s and on Campbell Island the population was severely depleted during the sheep farming era (1890-1931) by burning of vegetation, grazing, degradation of nesting habitat and direct predation of birds by people, and probably farm dogs. Once the islands were protected in the 1950s-60s, introduced mammals were gradually removed from the islands. The population recovered during the second half of the 20th Century but appears to have levelled off during the early 2000s. Southern royal albatrosses are vulnerable to fisheries bycatch in New Zealand and South American waters, as well as in transit between these areas.

Southern royal albatrosses are monogamous, with long-term partnerships, although a small proportion divorce. Birds mature at 6-12 years of age. The breeding pattern is biennial, and successful breeders take one year off between breeding attempts. A single egg is laid in November-December, chicks hatch in February and fledge in October. Both adults of a pair share incubation and rearing. Nests on Campbell Island are dispersed at 3.1 nests/ha, although occasionally they are only a few metres apart.

Southern royal albatrosses are generally solitary at sea. Young birds gather to display in gams on the breeding grounds. A variety of postures and calls are used in agonistic and sexual displays, including aggressive bill snapping, clapping and gulping. Gamming and pair displays include: sky-calling with wings outstretched and head and neck stretched upward, croaking, yapping, billing, head shaking and whining. Partners mutual preen at the nest.

Southern royal albatrosses scavenge post-spawning cephalopods (squid and pelagic octopuses), fish, crustaceans and salps. Food is mostly seized from the water’s surface, or by shallow plunges beneath the surface.

A large white-bodied albatross with black wings and a robust light pink bill with a creamy tip and a black cutting edge to the upper mandible. The leading edge of the inner upper wing becomes whiter with age, especially in males; juveniles have blacker wings than adults and white bodies with black flecking on the back, flanks, crown and tail.