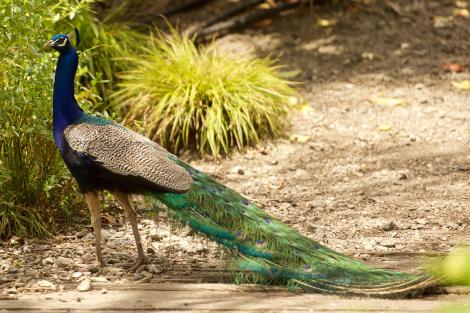 A large, well-known pheasant. Males have a characteristic display, raising their extravagantly long ornamental tail coverts, during the breeding season. Females move in groups between displaying males. Both sexes are generally tame in park situations but can be very wary in feral populations.

A large crested pheasant. Males are deep blue on the breast, neck, head and fan crest, and metallic green on the back and rump. The over-developed upper tail coverts have a tan, lilac and purple-brown sheen and are up to 1.4 m long. In mature males, about 140-150 feathers have ‘eyes’ which are deep blue in the centre and have outer layers of metallic lighter blue, gold and metallic green. The coverts are held up by the rigid tail feathers in their characteristic display, during which the tail coverts are violently shaken. Females are slightly smaller than males and have a coppery brown head, lighter brown throat and the rest of the neck is dull metallic green. The rest of the feathers are speckled brown.

Voice: a series of repeated crowing ka and shrill eow calls of varying frequency given up to 8 times in a row by males, primarily in the breeding season. Other distress and warning calls given throughout the year. Clucking calls are used by females with young and when pointing out food.

Peafowl have been released into the wild many times, mainly through benign neglect of birds kept for display. Peafowl are held on many lifestyle properties, and have become feral in the upper North Island, especially Northland, Auckland, East Cape and mid Hawkes Bay. The largest feral populations are in wooded lowlands and coastal farmland including the upper Wanganui River catchment, northern Mahia Peninsula and pine forests of the South Head of Kaipara Harbour. They are also present in isolated locations in Nelson, Marlborough and Canterbury. Absent from Stewart Island.

No population estimates. Peafowl are generally recorded in small mixed-sex groups of less than 10 birds in the pre-breeding season. They congregate in larger flocks during February-August. Up to 100 birds were in one field at Orere Point, Firth of Thames in April 2011, and more than 100 near Otane, central Hawke's Bay in June 2016. Other large flocks included 17 at Whakapirau, North Kaipara, and 35 at Waipu Caves, Northland.

Tame birds are often killed by dogs. Peahens are not attentive mothers, and many chicks are taken by predators. Feral population easily controlled by hunting. When disturbed, peafowl typically run downhill and then fly.

Breeding season late August to early January. Displays end 7-10 days before males moult their train of tail coverts. Females lay in bare scrapes concealed within long grass, and incubate eggs and raise young on their own. Clutch size is typically 4-6 eggs. Incubation takes 28-30 days and chicks can stay with their mother for more than a year. In wild populations, clutches appear to be deserted when 1-2 young are hatched. Females with young remain separate from flocks, until the young are 4 months old. Chicks forage for themselves with the peahen pointing at food with her bill. A single brood is raised per annum. Males take 6 years to be fully mature.

Wild peafowl descend from roost trees within the first 2 hours of dawn, and ascend to their roosts about half an hour after sunset. They feed most actively in the early morning and during the last two hours of daylight. Males arrive quickly at display sites during the breeding season and seldom leave them until mid afternoon. Males display in expanded lek (i.e. several males display out of view but in vocal contact with each other) and are visited by groups of females. Outside the breeding season males flock together with females. Males tend to roost alone or in groups. Young males leave roost sites of females and young to roost with other males or alone at the end of their second year. Females and young less than 4 months old roost separately from other peafowl.

Peafowl are omnivorous, taking grains, seeds and fleshy fruits, flowers, and invertebrates, especially cicadas and crickets. They peck at objects and climb trees to access fruits and flowers.