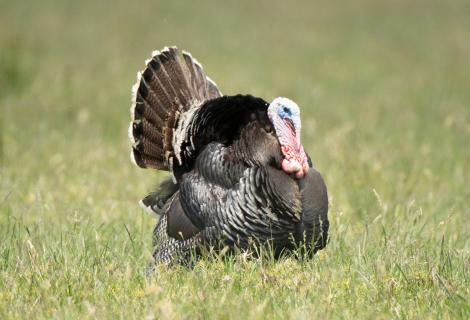 Turkeys are large, bulky birds with predominantly dull blackish-brown plumage. When seen at close range in good light, males have copper, greenish-gold and blackish-blue sheens on their feathers. The long tail feathers are barred brown with a blackish-brown subterminal band and pale brown terminal band. The exposed head skin is bare, with prominent blue and red wattles that are more brightly coloured when engorged during display. When displaying, males puff up their contour feathers and wing coverts, and hold their wings spread and their tail fanned. Females are smaller than males and have less iridescent sheen on their feathers, no leg spurs and their smaller facial wattles which are not as brightly coloured as those of the males. The juvenile plumage is streaked with light brown spots.

Voice: the characteristic loud turkey gobble call is given by males during the breeding season, in aggressive interactions and as a mate attraction call. Several other calls are also given, including a drumming call.

Turkeys were released into the wild or escaped from farmyards many times from the 1860s to the present. The earliest release recorded was on Kawau Island in the 1860s, and turkeys were feral in Hawke’s Bay by 1894. Their feral range has expanded since the 1970s, and they are now found in rough farmland with scattered trees throughout much of lowland North Island, the Marlborough Sounds, and at scattered eastern locations in the South Island. Turkeys are also feral on some large farmed islands including Waiheke and Great Barrier Islands.

No population estimates. Feral turkeys are sparsely distributed, occurring in groups of tens of individuals from late summer to late winter. In the breeding season, smaller groups form comprising a dominant male and 4 - 5 females.

Many are killed by dogs. Chicks are likely to be taken by cats, ferrets, pukeko and swamp harriers.

Males defend a harem of females during the breeding season. The female does all the incubation and chick-rearing, clucking to maintain contact with her brood. There is no information on breeding success from wild New Zealand populations.

Wild turkeys are wary and do not allow close approach. They feed in small flocks during the day, and roost on fence posts and in trees at night. Turkeys are more gregarious outside the breeding season, with females and young males forming larger flocks. Older males are often solitary.

A large, bulky game bird with long legs and mostly dull black-brown plumage. The exposed head skin of adults is bare with males having blue and red throat wattles that become brighter when engorged during display.

Free range captive male (many other species in background)

Quiet call given by male (greenfinch, chaffinch and song thrush in background)