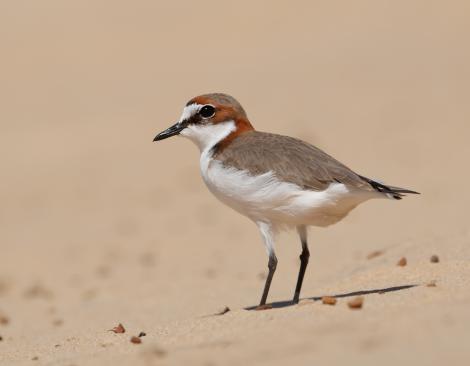 The red-capped plover is Australia’s most widespread beach-nesting shorebird, and is a familiar sight on beaches in the south of the continent. Like many of Australia’s birds which rely on water for their breeding strategies, it has adapted to respond to suitable wetland habitat becoming available. For example, red-capped plovers often move in response to rain events in the interior.

The red-capped plover is a small plover with white underparts and grey-brown upperparts, with both sexes possessing a white forehead, and the male with a bright rufous crown and nape, bordered by a black frontal band. The female has a paler version of this cap, with the rufous replaced by a light grey-orange and the black frontal band by a darkish grey. In the male, the rufous nape extends down the back of the neck towards the breast and is again bordered by black on its anterior margin. The female has this also, but lacking the black border and less strongly rufous. There is little variation between seasons, but there is considerable individual variation. Juveniles look not unlike the dullest end of variation in the adult female. An adult male should present no identification problems, but dull females and juveniles can be difficult to distinguish from immature and non-breeding banded dotterel. In flight, a clear white wing bar and white outer tail are visible.

Similar species: Kentish plover, which is vagrant to Australia (not recorded from New Zealand), is slightly larger, with a longer and thinner bill, longer white supercilium, complete white collar, and larger dark breast patches. Lesser sand plover and banded dotterel are both larger than red-capped plover at 18-21 cm. The banded dotterel has a larger bill, is plainer and darker above, and shows less contrast in flight when viewed from above. A non-breeding adult banded dotterel shows at least some sign of its two bands at the side of the breast. Juveniles often have a suffusion of buff around the head and neck. In all plumages, the pale supercilium extends further back on banded dotterel. Lesser sand plover has a shorter, thicker bill than red-capped plover, is darker and plainer above, has larger dark patches at the side of the breast, and a more prominent supercilium.

Restricted to mainland Australia and Tasmania, red-capped plover is largely found near the coast in the southern half of the continent. Apart from vagrancy to New Zealand, there is a doubtful record from southern New Guinea. It prefers saline water, but can tolerate anything from fresh to hypersaline situations. It occurs on a wide variety of wetlands, from ephemeral inland salt lakes to estuarine mudflats, and sometimes far from water on dry claypans and grassland.

First recorded from New Zealand in 1878 near Waikanae, the red-capped plover was not reported again until 1947, when a female interbred with a male banded dotterel at the Ashley River in North Canterbury. Up to eight birds were seen at this location until 1980 and breeding occurred in several North Canterbury rivers during this period. Although largely seen in the South Island, there are some records from 1966-1968 from Miranda. The last sighting in New Zealand was a bird at Lake Ellesmere in January 1981.

Predominantly a summer breeder around the coasts of Southern Australia, the red-capped plover also responds to inland rains and travels to take advantage of the good conditions. Its nest is an unlined scrape into which two black spotted, pale yellow-brown eggs are laid. Like many plovers, ‘broken-wing displays’ are used to lure potential predators away from nests when eggs or young are present.

Pizzey, G. 2007. The field guide to the birds of Australia. 8th edition. HarperCollins.

A small plover with a short straight black bill, black stripe between the bill and eyes, dark legs, white forehead and underparts, grey-brown upperparts, and in males a bright rufous crown and nape bordered by a black band at the front and shoulders. Females have a paler cap and band and lack the black bordering.