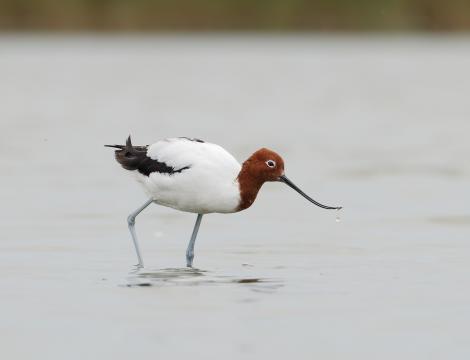 Together with the stilts, avocets form a family of their own, which occurs almost throughout the world.  Unmistakable, with its upcurved bill, chestnut head and distinctive markings in flight, the red-necked avocet can assemble in large and spectacular flocks.  It breeds in response to rainfall events in inland Australia, and there can be a gap of many years between attempts to breed.  In Australia, they frequently associate with the related pied stilt and the Australian endemic banded stilt.  Although widely reported from New Zealand in the 19th Century, the red-necked avocet has been rarely seen in the last hundred or so years.

The red-necked avocet is a large, long-legged, strikingly marked wader with a long upcurved bill. With its chestnut head and neck, and otherwise black-and-white plumage, the red-necked avocet is unlikely to be confused with any other bird given good viewing conditions. Its legs are pale blue-grey and they trail well behind the tail in flight. The wings are broadly tipped with black, as is a part of the back, which in flight gives the impression of a broken dark ‘M’ against white wings. The chestnut head becomes slightly paler around the base of the bill, and when the feathers are worn, this can become a white ring at the base of the bill.

Voice: red-necked avocets are largely silent unless disturbed, when a yapping, or wheezy whistling call is heard.

Although its breeding is largely confined to south-eastern and south-western Australia, the red-necked avocet is widespread across the southern part of the continent. It is a vagrant to Tasmania, and there is one untraceable record from Norfolk Island at the time when the species was irrupting into New Zealand (1854). Red-necked avocets prefer saline water, but can tolerate anything from fresh to hypersaline. Salt-evaporation ponds, sewage works, and ephemeral ponds, especially when salt levels have risen due to evaporation, are all good habitats. Breeding typically takes place at inland saltlakes, either directly on the ground or amongst low vegetation.

During 1859-64 there were many records of red-necked avocets in New Zealand, from Whangarei south to Dunedin. It has been suggested that the species bred in New Zealand during that period, but there is no direct evidence that this occurred. Since 1870, there have been only four accepted records: Invercargill (1892), Lake Ellesmere (1912 & 1945), and Westport (February 1968 – 1970). There was a probable sighting at Catlins River in April 1952; a more recent record from Port Waikato was never submitted for verification.

There are no major studies of the social behaviour of the red-necked avocet, apart from some information about their breeding biology. They are hard to approach unnoticed given their preferred habitat. Breeding can take place as a pair, or in colonies of up to 150 pairs.

Unlike other species of avocet, the red-necked avocet is not recorded as stirring mud with its bill. The main feeding action is a sweeping back-and-forth of the bill, which can occur whilst wading through the water, whilst swimming, or even when the head is completely submerged. Alternatively, birds peck or jab at prey items, which may include brine shrimps, annelid worms, molluscs, aquatic insects, fish, seeds and vegetation. No New Zealand data.

Pizzey, G. 2007. The field guide to the birds of Australia. 8th edn. HarperCollins.

A slender long-legged black-and-white wader with a long upcurved bill and chestnut head and neck. The wings and part of the back are broadly tipped with black which gives the impression of a broken dark ‘M’ against white wings during flight, and the pale blue-grey legs trail well behind the tail during flight.