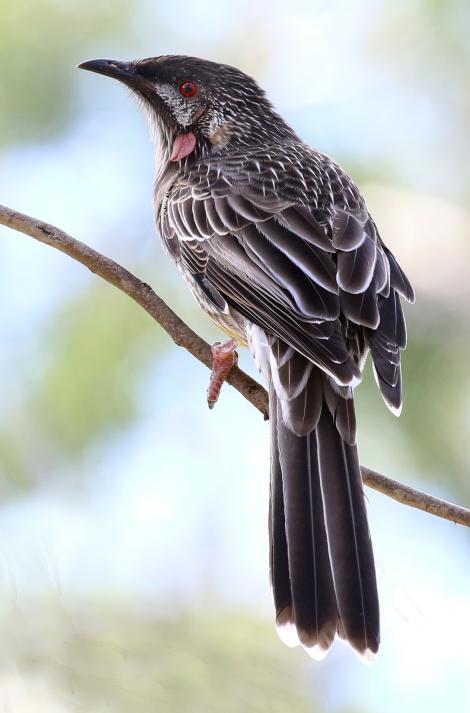 Although widespread and common in southern and eastern Australia, red wattlebirds have been identified just twice in New Zealand and both of these specimens are now very old. The circumstances surrounding the first one are obscure. It was first recorded as a skin in the Auckland Museum about 1855 and said to have been taken at Matakana in Northland. It was new to Buller and he named it as new, ironically choosing exactly the same specific name that it had already been described under. A second bird was collected at Rahotu in Taranaki in 1882 - shot by a taxidermist named Avery near the camp of soldiers taking part in the now infamous action against the Maori at Parihaka. No further red wattlebirds have been identified in New Zealand, and they barely rate a mention in the current field guide.

The red wattlebird is a large honeyeater, slightly larger than a tui but not as robust. The plumage is predominantly brownish-grey, darker on the crown, back wings and tail, with dense white streaks on the body. The belly is yellow. They have pale grey cheeks and a small fleshy red wattles hang from the rear corners of these. The long tail has prominent white tips to each feather, the bill is black, the eye dark red, and the legs and feet are fleshy pink.

Voice: red wattlebirds are noisy. When feeding, a harsh chok-ch-chok or yak yak yak is given by the male and a higher tew tew tew from the female with a harsh chok as an alarm call.

Similar species: there are few confusion risks among New Zealand birds, other than an abnormal pale tui. The larger long-tailed cuckoo has different body proportions with the long tail and heavier bill; it also has a pale breast and belly with dark streaks, a darker back and a distinctive call. The yellow wattlebird of Tasmania has not been recorded from New Zealand, but is similar to the red wattlebird apart from being larger and paler, and having pendulous yellow wattles that are attached higher up, behind the eye.

Red wattlebirds are widespread in the forests and shrublands of southern Australia and may use gardens and orchards as well.

In Australia red wattlebirds may roam widely to visit dispersed seasonal food sources, often travelling in groups. They commonly visit well vegetated gardens and orchards and may damage fruit. They disperse to breed.

Red wattlebirds have a diverse diet including nectar, fruit and insects.

A large brownish-grey honeyeater with darker feathers on the crown, back wings and tail, dense white streaks on the body, ye\rllow belly, pale grey cheeks and a small fleshy red wattles that hang from these. The long tail has prominent white tips to each feather, the bill is black, the eye dark red, and the legs and feet are fleshy pink.

Song from a pair (traffic in background)