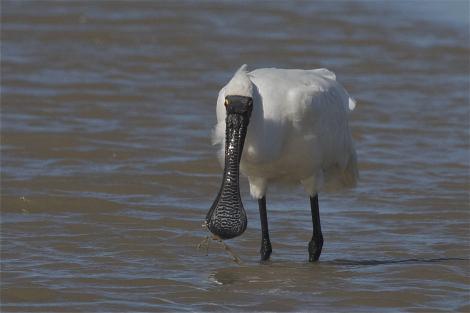 The stately royal spoonbill is one of six spoonbill species worldwide, and the only one that breeds in New Zealand. This large white waterbird was first recorded in New Zealand at Castlepoint in 1861. Sightings increased through the 1900s, with breeding first recorded next to the white heron colony at Okarito, south Westland, in 1949. Since then it has successfully colonised New Zealand from Australia and is now widespread, breeding at multiple sites on both main islands, and dispersing to coastal sites across the country after the breeding season. In flight, birds hold their neck outstretched and trail legs behind, looking rather awkward, like a "Dr Seuss" cartoon bird. Their closest relatives are the ibises.

A large, bulky, long-legged waterbird with white plumage and black spoon-shaped bill, facial skin, legs and feet. During the breeding season, adults grow distinctive long white crest feathers on the back of the head or nape, up to 20 cm long in males. The crest is raised during mating displays revealing pink skin beneath. The bill is 136 - 220 mm long; the wingspan is circa 120 cm. Breeding birds have a creamy-yellow breast, a yellow patch above each eye, and a red patch in the middle of the forehead in front of the crest feathers. Females are slightly smaller than males, with shorter legs and bill. Outside the breeding season the crest feathers are smaller and the rest of the plumage often appears soiled. Juveniles resemble non-breeding adults but are slightly smaller with a shorter bill, dark tips to the main flight feathers, and lack a crest and coloured face patches. When wading in shallow water it often submerges the bill and repeatedly sweeps it in a wide arc in search of prey.

Voice: grunts, groans and hisses with chew and cho calls made at the nest.

Similar species: there are two records of the similar yellow-billed spoonbill in New Zealand, which is slightly larger and heavier, with a pale yellowish bill and legs. The white heron is taller and thinner with a slender, pointed, bright yellow bill (note that bill is mainly black just before and during breeding).

Breeds in Australia and New Zealand. Straggles to Indonesia, New Guinea and some Pacific islands. In New Zealand, breeds in coastal colonies around North and South Islands, and disperses widely around the country after breeding. Single records from the Chatham and Kermadec Islands. Breeds in the exposed canopy of tall kahikatea trees, on the ground near estuaries, rivers and harbours, in reeds, in low shrubs, and on steep rocky headlands at Taiaroa Head and Nugget Point. Tends to breed near white heron and shag colonies. After breeding, birds disperse to estuaries and wetlands around the country. Prefers freshwater to saltwater but can inhabit both. In New Zealand, most birds inhabit estuaries.

Royal spoonbills are sensitive to disturbance during the breeding season, and are vulnerable to development and recreational activities. The IUCN Red List classifies it as Least Concern. Department of Conservation classifies it as naturally uncommon but increasing with a restricted range and secure overseas.

Colonial and semi-colonial annual breeder. Breeding birds gather at nesting sites in October. Mixed groups of unpaired birds gather to form "bachelor parties" and begin displaying, often in trees near the breeding colony. Males spar more often than females, extending their necks, bill gaping, and jabbing and wing flapping. Courtship involves circular or figure-of-eight flight displays over the breeding area with exaggerated flight noise. Both sexes bow while clapping bills and quivering heads, raising and lowering crest plumes. Mutual preening follows once the pair bond is established. Greeting display involves repeatedly nodding with open bill, 45° above and below horizontal, and crest fanned. Nests in colonies alongside water, usually with other waterbirds. The bowl-shaped nest of sticks is lined with leaves and other vegetation, and usually placed in the crown of a tree over water or among tall reeds. Nest sites may be reused in consecutive years. Monogamous during breeding season; 2-4 dull white eggs with brown blotches laid November-February. Both adults share incubation of 20-25 days, and feeding of young by partial regurgitation. Chicks fledge after seven weeks. Juveniles are fed by both adults for several weeks after fledging. Young birds forage alongside parental adults for some time before family group disperses to traditional wintering site.

Feeds while wading in water, repeatedly scything the submerged spoon-shaped bill left and right in an arc. Feeds day or night, whenever tide is suitable. Eats mainly fish in freshwater, and shrimps in tidal flats; also eats other crustaceans, aquatic insects and frogs. Bill structure limits it to feeding in water less than 40 cm deep over sand, mud or clay. Also drags, probes and grabs with bill. Vibration detectors inside the bill can detect prey in murky water or darkness. When prey is detected the bird snaps the bill shut and lifts it to let prey slide down its throat. Feeds and roosts in flocks. Birds fly in lines or "V" formation. Resting birds often stand on one leg in hunched posture with the head resting over shoulder on back with eye still visible and bill tucked under feathers.

Fish, including flounders, shrimps and other crustaceans, aquatic insects, and frogs.

A large white heron-like bird with long black legs and a large black spoon-shaped bill. In breeding plumage it has long white crest feathers on the nape.