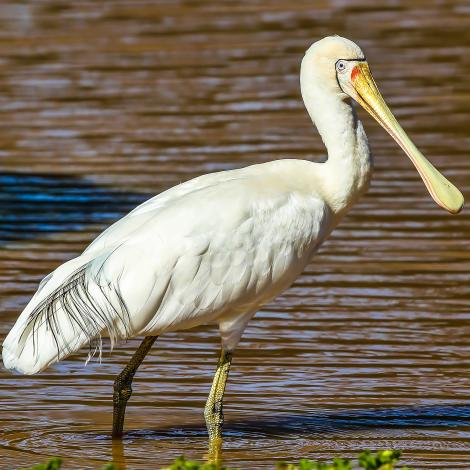 Yellow-billed spoonbills in Australia respond rapidly to rainfall, breeding while temporary swamps remain full. The temporary nature of many of Australia’s inland wetlands and the potential mobility of these birds suggest that they should arrive in New Zealand more often. So far two only are known to have come across the Tasman Sea, whereas the very similar royal spoonbill arrived more frequently, established a breeding population and is becoming more common year by year.

The yellow-billed spoonbill is a large white bird with long legs and a long bill, flattened at the end. The yellow-billed spoonbill differs from the much more common royal spoonbill in having the legs and bill pale yellow instead of black, and the plumage is cream coloured rather than pure white. They fly with the neck outstretched like other ibises and spoonbills, but the lack of any black and the prominent yellow bill are distinctive. The typical flight pattern consists of periods of wing beats followed by glides but they can soar up to high altitudes.

Voice: Usually quiet but may give a loud call described as a coughing-hiss.

Similar species: royal spoonbill has a black bill and legs.

Yellow-billed spoonbills are widespread in Australia, mainly in the eastern and northern parts of the continent. They are absent from Tasmania. Their movement patterns are not well known, possibly seasonal in the north but not in the south. Vagrants to Lord Howe and Norfolk Island and New Zealand occurred during or after periods of high rainfall in inland Australia. They mainly utilise temporary or permanent freshwater wetlands, and are much less frequently found in estuaries or harbours. They feed in shallow, open water and may use very small water bodies.

In Australia the range of yellow-billed spoonbills has increased since European settlement as they use farm dams and channels. However, they are intolerant of disturbance, and many natural wetlands used for feeding and nesting have been degraded by draining, clearing, or increased salinity.

Yellow-billed spoonbills may be solitary or gather in small flocks. The bird at Rangaunu Bay kept company with two royal spoonbills and a white ibis. Feeding is tactile, sweeping the bill from side to side, walking steadily through the water but occasionally running to catch prey.

Calls at roost (galah in background)