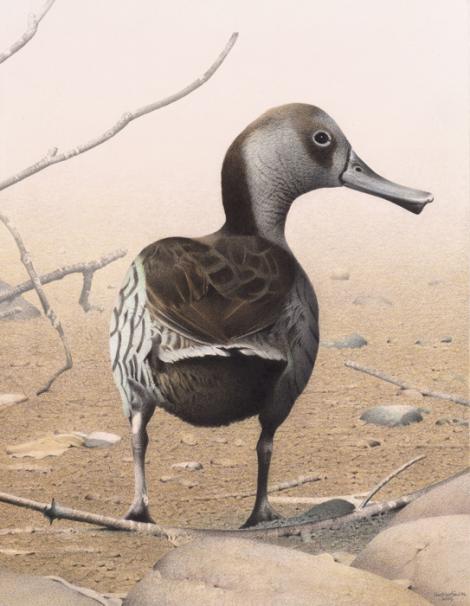 Scarlett’s duck was one of eight species of waterfowl that became extinct in New Zealand following Polynesian arrival and before European contact. Its nearest relative was the only other member of the genus Malacorhynchus, the pink-eared duck from Australia. The pink-eared duck is a small, unusual-looking filter-feeding duck that has occurred once in New Zealand as a vagrant. Scarlett’s duck was twice as large, but probably similar in appearance. It was fully flighted and aquatic, preferring the open water of wetlands and lagoons. Scarlett’s duck occurred in the North and South Islands and on Chatham Island. It may have occupied the niche subsequently filled by the Australasian shoveler, filter feeding and dabbling.

It is likely Scarlett’s duck was one of our more striking ducks as its closet living relative, the pink-eared duck, is a bizarre-looking bird. It is a small duck with an enormous, fleshy-margined bill, a dark ‘bandit’ mask, a patch of vivid pink over the ear, and bold black-and-white barring on the flanks. Scarlett’s duck was twice as large as the pink-eared duck, and was aquatic, living on lakes and wetlands.

Scarlett’s duck was apparently widely but patchily distributed, inhabiting swamps and shallow lakes – a habitat that was relatively rare - in North Otago, Canterbury Plains, Marlborough, Hawke’s Bay and the Chatham Islands. It was a specialised filter-feeder that dabbled in shallow water, probably occupying a similar niche to shovelers.

Few fossils of Scarlett’s duck have been found, indicating that it occurred at low densities even at those sites where it was found. It is possible that this low density was a result of territoriality.

Scarlett’s duck became extinct sometime after Polynesian arrival. It was hunted by Maori, and its nests were possibly susceptible to predation by Pacific rats.

Bones of several  juveniles have been found, indicating that Scarlett’s duck bred at its lowland feeding grounds.

Scarlett’s duck was a specialised filter feeder, feeding on small organisms on the surface including micro-crustaceans such as ostracods and cladocerans. It is unlikely that it dived for food.