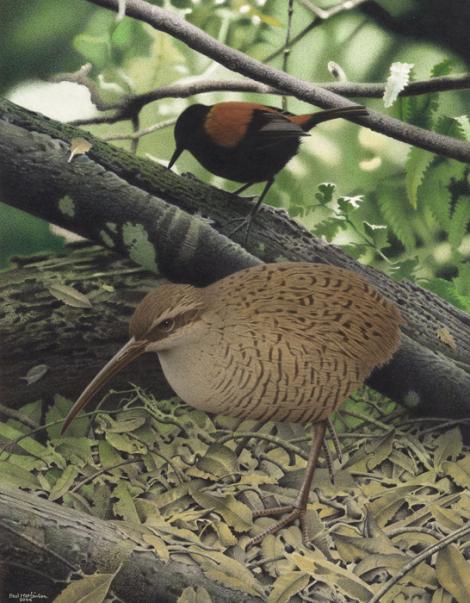 The first evidence of the existence of the snipe-rail was a skeleton discovered in Karamu Cave, south-west of Hamilton by cavers. They photographed the bones by candle light and carefully collected them so that they could be described and named. Excavations of a stratified fossil bed at Lake Poukawa, Hawke’s Bay showed that although previously common, snipe-rails were drastically reduced in numbers during the last 1000 years of the records. This decline coincided with Maori occupation of New Zealand and the vegetation of the site changing from podocarp forest to bracken and scrub, which suggests fires were lit about that time. The key factor, however, was probably the introduction of the Polynesian rat or kiore which might have attacked the adults but certainly would have destroyed the eggs and chicks of these birds, which were extinct by the time of European settlement.

The snipe-rail was a small flightless rail with particularly tiny wings but well developed legs. It was estimated to have been about 240 g in weight, which makes it a bit larger than a banded rail. The snipe-rail was remarkable for its very long and slender curved bill (about 7 cm long), which was longer, in proportion to the size of the bird, than that of any other rail.

Bones of the snipe-rail have been found widely in the North Island but never in the South Island. They were most common under wetter western forests with a closed canopy.

Some inferences can be made about the life style of the snipe-rail from features of its bones. The remarkable bill was very different from the solid pecking bills of most other small rails, being long, slender and flexible. The upper part of the bill could be bent, both near the base and near the tip, using muscles in the head with the force transmitted using ligaments and bars of bone. This allowed the bird to open and close the tip of the bill under the soil, while the bill base remained closed. This facility is known from other species of birds such as godwits, snipe and kiwi that probe into the substrate for prey, and allows them to grasp food with considerably less effort than if they opened the entire bill. The bill tip is slightly flattened and pocked with pits for sensory cells, known as Herbst’s corpuscles, which sense changes in pressure in moist soil and mud. This shows that snipe-rails were able to use a sense known as “remote touch” where a probing bird can detect the movements of prey without actually touching it because the waves of pressure in water that worms and grubs make as they move in the soil are felt. This improves the birds ability to locate and capture prey in the soil.

Snipe-rails shared the forests with other species of probing birds that each had a different reach: North Island snipe could have reached to about 45 mm, snipe-rail to 56 mm, little spotted kiwi to 80 mm, and North Island brown kiwi to 130 mm.

A small extinct flightless rail species with tiny wings and well developed legs that was estimated to have been slightly larger than a banded rail. The snipe-rail was remarkable for its very long c.7 cm slender curved bill, which was longer, in proportion to the size of the bird, than that of any other rail species.