Geographical variation: New Zealand populations are included in the nominate subspecies tabuensis, ranging from the Philippines to south-west Polynesia, including Australia and New Zealand. Two other subspecies have been named from the highlands of New Guinea. 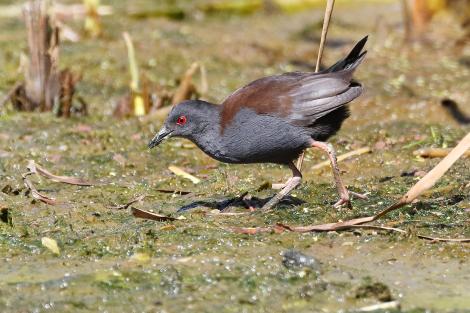 The spotless crake is a cryptic bird of freshwater wetlands throughout the North Island. It is a small, dark coloured rail (about half the size of a Eurasian blackbird) that is very secretive and infrequently seen. Their furtive nature and good dispersal ability mean that they could be present in areas of suitable habitat far from known populations.

The spotless crake is a small dark rail. The plumage is dark brown on the upper parts and dark bluish grey beneath. The stout bill is black. The legs are orange-pink and the bright red eyes contrast sharply with the dark head. Juveniles are duller with a pale chin and throat and dark legs.

Voice: heard more often than seen. Several different calls are given, including bubbling sounds, a short 'pit-pit', a repeated 'mook' and the loudest call, a long trilling 'purr'.

Similar species: spotless crake are similar in size and shape to a marsh crake, however marsh crakes are much more strikingly patterned. It is possible that calls of unseen birds could be confused.

Spotless crakes are widely if patchily distributed throughout the North Island, but are rare in the South Island. They are present on Raoul Island and the adjacent Meyer Islets (Kermadec Islands), and Great Barrier, Three Kings, Poor Knights, Tiritiri Matangi and Motuora Islands. There are no confirmed records from the Chatham Islands since 1949.

On the mainland the spotless crake is predominantly a bird of freshwater wetlands dominated by dense emergent vegetation, particularly raupo (Typha orientalis). They may forage on open mud near dense vegetation but are quick to retreat when disturbed. Spotless crakes live in dry forest on some islands, including the Kermadec Islands, Poor Knights, Tiritiri Matangi and Motuora.

No population estimates available. Fewer than 50 adults were estimated to be present on Aorangi in 1980, where the smallest territory was 45 x 50 metres, or approximately 4 pairs per ha.

Habitat loss through destruction of the vast majority of lowland wetlands for agriculture is presumed to have had a significant impact on spotless crakes. It was previously given the conservation status of Relict (i.e. occupying less than 10% of its original range) due to more than 90% of New Zealand’s wetlands having been converted to farmland and towns. Introduced predators are likely to prey on crakes. The presence of spotless crakes in dry forest on predator-free islands suggests they may have formerly used a wider range of habitats.

Spotless crakes are monogamous and territorial. When nesting in wetlands, the nest of woven grass and sedge leaves is raised 30–50 cm above water level, often in a clump of Carex sedge. Several nest-like platforms are often built near the actual nest. The clutch of 2–5 cream coloured eggs is laid from late August to January and incubated by both parents for 20–22 days. The chicks remain in the nest for up to 4 days and are cared for by both parents for 4–5 months. Chicks are capable of catching live prey from 3 days old.

Spotless crakes have a broad omnivorous diet, feeding on seeds, fruit and leaves of aquatic plants, and a wide variety of invertebrates including worms, snails, spiders, beetles and other insects.

Heather, B.; Robertson H. 1996. The field guide to the birds of New New Zealand. Viking: Auckland.

A small dark bluish-grey and brown rail with a stout black bill, long orange-pink legs and bright red eyes. Adult plumage is dark brown on the upperparts and dark bluish grey beneath; juveniles are duller with a pale chin and throat and dark legs.

Calls from birds in small rush-fringed swamp after playback