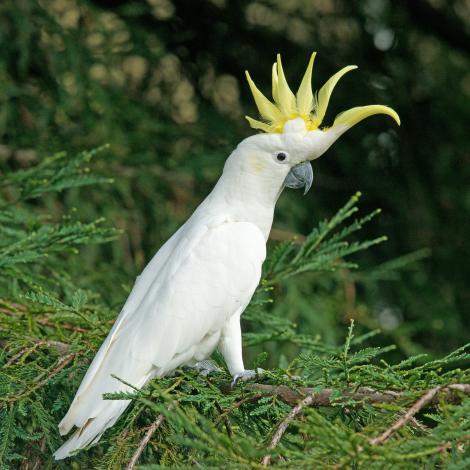 Sulphur-crested cockatoos are large white parrots, with yellow crest feathers, and yellow suffusion on the underside of the tail and wing. They are localised in their New Zealand distribution, with most populations on the west coast of the North Island, though flocks also occur on Banks Peninsula and the Catlins in the South Island. Sulphur-crested cockatoos were introduced to New Zealand in the late 19th Century and soon established wild populations. The area over which they occur has increased over time, though their numbers are not great; this species suffering considerable persecution, particularly through live-capture for the pet trade. They are typically found in lowland hill country farmland, with a mixture of exotic and native forest and arable land use. Birds occasionally venture into residential areas. In winter, flocks of hundreds of birds may form to feed on crops, such as maize.

Sulphur-crested cockatoos are large, stocky cockatoos, with short broad wings and a prominent yellow crest. The forward curving crest is normally laid back, but fans out when aroused. Remaining plumage is white, with pale yellow on the underside of the tail and wing. The black beak is robust, capable of breaking into hard seed pods and cones. The eye is dark red-brown. Females are slightly larger than males. Juveniles have a paler eye, and may have some grey in their plumage. Sulphur-crested cockatoos usually occur as pairs or small groups in spring and summer, may form large flocks in autumn and winter.

Voice: the most common call is a harsh screech given in flight, when perched and when alarmed. They also make softer cries, and guttural croaks or barks during conflict.

Similar species: sulphur-crested cockatoos are not easily confused with other New Zealand species, but flocks on the ground or in flight may be confused with cattle egrets from a distance.

Sulphur-crested cockatoos are widespread in northern and eastern Australia where woodland habitat is present. Other subspecies are found throughout New Guinea and the Papuan Islands. Populations have been established outside this range, including Western Australia and New Zealand. In New Zealand most populations are on the west coast of the North Island, though some are spreading east into the Bay of Plenty, Hawke’s Bay and Wairarapa. The largest populations are south of Port Waikato, and the Turakina and Pohangina Valleys. There are also small populations in the Waitakere ranges and at Wainuiomata, and on Banks Peninsula and the Catlins in the South Island. They are wide-ranging and may be seen outside these core areas, though isolated birds may be free-ranging pets or cage-escapes.

Sulphur-crested cockatoos are mainly found in farmland close to native forest or woodland and exotic tree plantations. The largest populations are associated with arable land, especially where maize is grown near to woodland habitat.

Populations are kept in check by capture for the pet trade. Each year many chicks are taken from nests, and occasionally large numbers of adults are trapped.

Sulphur-crested cockatoos mainly eat the seeds from introduced conifer trees and pasture and crop species, such as grasses and maize. Their impact on agriculture is generally localised, with flocks targeting specific fields of maize on a few properties just after sowing and when mature. Otherwise they are more of a nuisance value for rural communities, feeding on walnuts and damaging ornamental conifers. They may also cause damage to pine plantations, stripping branches when feeding. In native forest their impact is minimal, though they can have a massive impact on individual trees, at times stripping large numbers of branches.

Their potential to impact on native species is minor due to their largely agricultural and ground feeding habit, and the absence of kaka in the fragmented forest patches they occupy.

Sulphur-crested cockatoos are monogamous, forming long-lasting pair bonds. Nest exploration may occur at any time of year, with greatest activity at the nest occurring between July and December. The 1-2 eggs are laid in a nest cavity, which the adults enlarge from naturally occurring holes in trees. The nest is lined with wood chips chiselled from the walls of the nest cavity. Most chicks fledge in late December. Breeding pairs defend the nest hole, though other cockatoos may remain nearby during the nesting period. The relationship of these birds to the breeding pair is unknown. Only part of the population breeds in any one year. The rest of the population forms small nomadic flocks that range over a large area.

Sulphur-crested cockatoos are gregarious. Communal evening roosts in stands of tall trees are used outside the breeding season. Large flocks forage together early in the day, before splitting into smaller flocks for the rest of the day. During autumn and winter, large flocks may form on grassland or crops in the afternoon before retiring to roost. At dusk there is a period of activity, with a lot of calling and flying prior to settling into roost trees. Calling may occur throughout the night.

Cockatoos are not migratory, but there is seasonal variation in use of their home range. In spring and summer they are dispersed over a large area. Winter flocks concentrate their activity in the centre of the occupied area. Birds and flocks can move tens of kilometres per day.

Five species of lice were recovered from sulphur-crested cockatoos shot in the Turakina Valley in 1991.

Sulphur-crested cockatoos forage on the ground and at all levels of vegetation. The largest flocks occur when foraging on the ground. Smaller groups foraging in trees typically focus on the upper branches. Their diet consists predominantly of seeds, but they may take invertebrates. Important foods are seeds of grass, thistles, maize, macrocarpa and Pinus species.  In autumn they spend a lot of time feeding on the fruit of native trees, particularly podocarps, such as kahikatea. The food eaten varies throughout the year, depending on seasonally availability..

A large stocky white cockatoo with pale yellow on the underwings and undertail, large hooked black bill, red-brown eyes, short broad wings and a forward-curving yellow crest that fans out when aroused. Females are slightly larger than males and juveniles have a paler eye, and some grey in the plumage.

Flock of about 20 in trees takes flight

Calls of a small flock in forest remnant