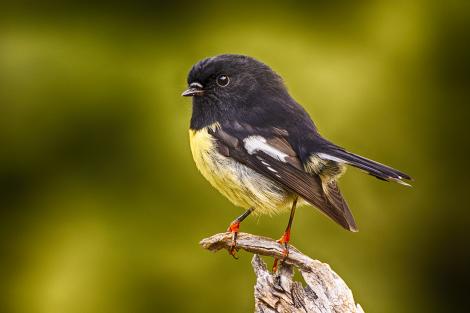 The tomtit is a forest and shrubland inhabiting species of both native and exotic habitats. It is rarely seen in highly modified open habitats, such as farmland and suburbia. Tomtits have a widespread distribution through the North and South Islands, and occur on some of their offshore islands, Stewart Island, Chatham Islands, Snares Islands and Auckland Islands. Most populations are dimorphic, males being mainly black-and-white, and females mainly brown-and-white. They are often heard giving contact calls or males singing, but are sometimes difficult to see. Individuals can be quite confiding, coming within a few metres.

Adults of both sexes of Snares Island tomtit are black, juveniles being a duller black-brown. In the four other subspecies, adult males have a black head, upper chest and back, black wings with one white bar on each wing across the bases of the flight feathers, a black tail with some white on some outer feathers, and white underparts. In the South, Chatham and Auckland Islands subspecies, males have some yellow and/or orange colouration on the lower chest and belly, being brightest at the sharp demarcation with the black on the upper chest. They have a white spot at the base of the upper mandible which can be enlarged during displays. Juvenile males have duller plumage, and have subtle streaking on head as a result of white shafts of black feathers. Adult female of Auckland Island tomtit is similar in colouration to male but with black areas being duller. Adult females of North, South and Chatham subspecies are brown over the head, back and wings (white/buff wingbar present), and fawn on the upper chest which fades to white on the belly. Juvenile females are similar, but with faint streaking on the head.

Voice: both sexes make short “seet”, “zet” or “swee” contact calls throughout the year, most often given singularly, but up to five in quick succession. Full song is given by adult males throughout the year, except during the moult period (February-April). The song has been rendered as “ti-oly-oly-oly-ho”, and lasts 2-3 seconds. Also, give a downscale call, a series of ‘chuck’ calls, descending in tone, and which start in rapid succession and finish slowly. Downscales are sometimes given after a neighbour has given such a call, and also in response to such calls by robins.

Similar species: there is no similar species to the tomtit in the North Island, South Island and Stewart Island forest and shrubland habitats; robins are larger, longer legged and lack white wingbars.

Tomtits are found from Northland to Stewart Island, particularly in forests of the central North Island and along the west coast of the South Island from Northwest Nelson to Fiordland. Also, occurs on several forested offshore islands, such as Little Barrier and Kapiti. Found on some islands of the Chathams group (Pitt, Mangere, Little Mangere and Rangatira), on the Snares Islands, and on Auckland Islands (Auckland, Adams, Ocean, Rose, Ewing and Enderby).

This adaptable species uses a variety of habitats from sea level to the subalpine zone. Tomtits can be found in all mature native forest types, including podocarp-broadleaf, beech, and manuka-kanuka forests, as well as regenerating forests after being logged. Exotic plantations are also occupied, particularly mature stands. Tomtits have been recorded occasionally on well-treed farmland, and in suburban parks and gardens. On Snares Islands and Auckland Islands, tomtits occupy forest, shrubland and also tussock grasslands with scattered shrubs.

Tomtits are widespread and fairly common through the North and South Islands. The population was estimated to number about 1000 birds on the Snares Islands in 1987, less than 1000 birds on the Chatham Islands in 2001, and no estimate has been made of numbers on the Auckland Islands. Although populations declined during European settlement (forest clearance), comparison of distribution of the species in the North and South Islands during 1969-79 and 1999-2004 suggest there was little or no change during the 20-year interval.

Presently, the main threat to populations on North and South Islands is from introduced mammalian predators, particularly ship rats. While many clutches and broods are taken by predators, adult females also suffer mortality because they alone incubate clutches and brood young, and their habit of nesting in shallow cavities means that they are not always able to escape once a predator arrives at the nest. To date this species has proven difficult to establish populations through translocation. Seven attempts have been made, some involving more than one transfer, with only two translocations (Mangere Island in the Chatham Islands, and Cape Kidnappers) resulting in new populations.

On the North and South Islands, the breeding season extends mainly from September to February. During this period pairs are able to rear three broods, although very few achieve this because clutches and broods are taken by predators. The breeding season is shorter on the Chatham, Snares and Auckland Islands, such that pairs rear only 1-2 broods. Nests are well concealed in thick vegetation or shallow cavities, and most clutches consist of 3-4 eggs. While the female alone incubates the eggs, the male assists by providing food to his mate 2-3 times an hour. Both members of the pair feed nestlings and fledglings.

Tomtits remain on their territories throughout the year. During the moult, territorial activities, such as singing, boundary patrolling and chasing out intruders, are much reduced, but during the rest of the year, especially during the breeding season, both males and females are vigorous in territorial defence. While territorial adults are sedentary, juveniles and immatures looking for mates and vacant habitat sometimes disperse tens of kilometres, including crossing unsuitable habitat (e.g. open-country farmland) and over water. As a result individuals are sometimes seen during autumn-winter in some towns.

Tomtits search for prey at all levels in forest, from in emergents above the canopy to the ground. Their principle method of foraging involves scanning the surrounding area while perched on a branch or clinging to a trunk, and then flying forth to snatch up a prey item or moving to another perch to scan a new area. Areas scanned for prey include all vegetation surfaces and the ground. They generally forage alone or in pairs, but occasionally associate with mixed-species foraging flocks.

Tomtits feed on a wide range of small invertebrates, including spiders, amphipods, beetles, flies, moths (both adults and larvae) and weta. Also, small fruit are occasionally eaten, being swallowed whole.

A small songbird with a large head and small black tail in which adult males have a black head, upper breast and back, black wings with a white bar, and white underparts, while females are similar but with duller black areas. In the South, Chatham and Auckland Islands, males have some yellow/orange colouration on the lower breast and belly; both sexes have a white spot at the base of the bill.