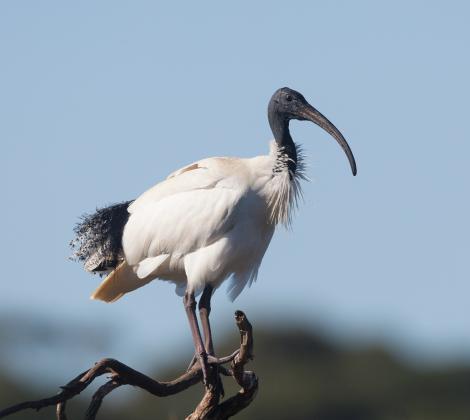 A strange bird spotted on the mudflats at Appleby, Nelson, by Mr M. Rogers in March 1925 was captured alive by his son who climbed the tree it roosted in and snared it with a noose on a stick. It was identified as the first white ibis found in New Zealand. Shortly after, several more white ibises were reported from scattered locations throughout the country, suggesting that a flock had crossed the Tasman Sea. Similar influxes have occurred in 1957-8 and 1977-8. There have been few records since.

White ibises are large birds, a little bigger than a white-faced heron. They are plump and mainly white with a thick, long, black down-curved bill and a black (adult) or blackish (immature) head and neck. The tips of the wings are also black, and show at rest. The legs are long and black. In flight the neck is outstretched, the wings are broad and blunt-ended and the tail short with the legs trailing behind. The wings beat a little faster than a heron’s.

Similar species: white ibis is most similar to a royal spoonbill in flight but lacks the long spoon-shaped bill. With its large down-curved bill, the white ibis could only be confused with the related straw-necked ibis and glossy ibis, or the eastern curlew, all of which differ greatly in overall coloration.

White ibises are widespread in Australia, but are especially common in the south-east. They inhabit shallow freshwater wetlands, estuaries and grasslands including man-made habitats even in urban areas. Adults are typically sedentary in south-eastern Australia, but partial migrants in the south-west. Immature and adult white ibises living in seasonally and irregularly fluctuating wetlands move widely, especially during dry spells, and this appears to have driven the invasions of New Zealand in the 1950s and 1970s.

Records of white ibises in New Zealand show three discrete invasions and several scattered records after 1980. Dated records for the two later invasions can be interpreted as particular individuals settling and making relatively local movements only. During the first influx in 1925, white ibises were seen in Appleby (Nelson), Riwaka, Rotomanu (Westland) and south Taranaki. About 11 immature birds were present during the second influx in the winter of 1957. They were recorded from Te Kopuru, Port Albert (Kaipara Harbour), Lake Orawheiti (Pakaraka), Kawhia, Ngaroto Lake (Te Awamutu), Rangitikei River mouth (4 birds), Westport (one bird present until October 1960), Arahura (Westland, 2 birds), Hokitika (probably the same 2 birds), Doubtful Sound, Papatotara near Tuatapere (one shot), and various locations from Otautau to Invercargill (one bird staying to June 1958). A third influx of about six single birds occurred in 1975, with some birds persisting until 1979. Sightings included Awanui (Northland), Waima, near Huntly, Maketu and other Bay of Plenty estuaries and lagoons, Manawatu Estuary and Foxton, and Shag River estuary (North Otago). White ibises have subsequently been seen at Oamaru in 1984, Orowaiti (Westland) in January 1986 and Helensville in January 1989. There was an unverified record from Okuru, Westland in April 2006.

The European settlement of Australia has benefitted white ibises, and their range has expanded as farmland has been cleared and areas irrigated. They also utilise urban habitats, feeding on lawns and scavenging waste.

White ibises occur alone and in flocks. They roost in trees, often with other species of ibises, spoonbills or herons, and breed colonially. When feeding they walk and wade slowly, probing for food.