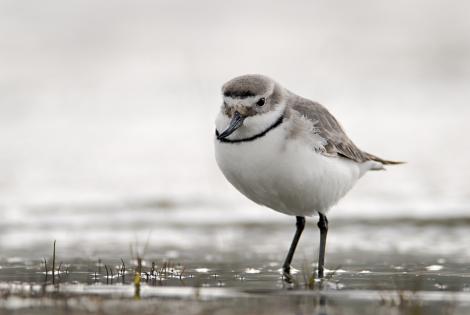 The wrybill is a small pale plover which breeds only in braided rivers of the South Island. It is the only bird in the world with a laterally-curved bill (always curved to the right), which it uses to reach insect larvae under rounded riverbed stones. Wrybills are completely dependent on braided rivers for breeding; all their life stages are predominantly grey, and highly cryptic among the greywacke shingle of the riverbeds.

The wrybill is an internal migrant. After breeding, almost the entire population migrates north to winter in the harbours of the northern North Island, notably the Firth of Thames and Manukau Harbour. On their wintering grounds, wrybills form dense flocks at high-water roosts; the highly-coordinated aerial manoeuvres of these flocks have been described as resembling a flung scarf.

Wrybills are small, pale plovers that are much more approachable than most New Zealand waders. Their underparts are white, with a black upper breast band from mid-winter to the end of the breeding season. The upper parts and sides of the face are pale grey, and the forehead white. The bill is long and black, with the distal third curved 12-26° to the right. The legs are dark grey to black. The sexes are alike in eclipse plumage; juveniles lack the black breast band. In breeding plumage, males are distinguishable by a black line above the forehead; this is highly variable however, and difficult to see in some individuals.

Voice: the most common call is a 'chip' that appears to indicate alertness. Rapid 'churring' is used when chasing intruding banded dotterels or other wrybills, and very quiet 'grating' call used to communicate with chicks. Flocks in flight (and sometimes when milling on the ground) may indulge in excited high-pitched 'chattering'.

Similar species: wrybills are unlikely to be mistaken for other species in breeding plumage or if the bill is seen well. In eclipse plumage the banded dotterel is superficially similar, but has browner upper parts and short straight bill. Confusion is possible with some rare transequatorial migrant waders, notably sanderling and terek sandpiper, but these lack the black breast band, and their bill shapes differ.

Wrybills breed only in the South Island, east of the main divide. The large majority of the population breeds in Canterbury between the Waimakariri River in the north, and the rivers of the upper Waitaki (Mackenzie) Basin in the south. Main strongholds are the Rakaia, upper Rangitata, and Mackenzie Basin. Four rivers in Otago (Hunter, Makarora, Matukituki, and Dart) and two in North Canterbury (Ashley and Waiau) have small populations. Wrybills previously bred in Marlborough, but their breeding range has contracted southwards over the past 120 years.

From January to July, wrybills are present in harbours of the northern North Island, mainly Manukau and Firth of Thames, smaller flocks elsewhere. During migration, small flocks are often seen briefly at South Island east coast lakes and estuaries, and flocks may settle at rivermouths in the southwestern North Island.

Wrybills breed exclusively on braided riverbeds. On their wintering grounds, they feed on inter-tidal mudflats in harbours and estuaries. High-water roosts are usually near foraging areas, commonly on local shellbanks and beaches;  occasionally on pasture. In the upper Manukau Harbour, birds regularly roost on roofs of large buildings; occasionally on tarmac at Auckland Airport. On migration, flocks generally follow coastlines, but are not averse to flying overland. A high proportion of the population passes through Lake Ellesmere on both migrations.

Counts on breeding grounds are impractical – wrybills are highly cryptic and widely dispersed. Combined counts from wintering flocks suggest a total population of 5000-5500. Counts show high variability (which obscures trends), but the population is thought to be declining slowly.

The main threats faced by wrybills are predation (by introduced mammals and native birds), flooding of nests, and loss or degradation of breeding habitat. Threats vary temporally and spatially, and their relative importance overall is unclear. Actual and potential threats to habitat include loss to hydro-electric power schemes, abstraction of water for irrigation, weed growth, and disturbance caused by a wide range of recreational and commercial activities. On wintering grounds, predation of adults has been recorded, and some loss of roosting habitat is likely as mangroves encroach. Wrybills appear to be prone to collision with man-made objects. Occasional significant strikes have occurred at Auckland Airport, and collisions with fencelines and powerlines have been recorded.

A small proportion of the population is managed through predator control programmes. The largest such area covers the whole Tasman River catchment, but benefits are equivocal to date. A few small areas are managed by community groups (e.g. the lower Ashley River).

Wrybills breed in monogamous dispersed pairs. Territories may overlap with those of other species (e.g. banded dotterel, black-fronted tern, pied stilt), but are vigorously defended against other wrybills. The nest is a shallow scrape in the gravel, lined with many small stones. The normal clutch is 2; first clutches are laid in September or October. Replacement clutches laid after loss may occur through to January. Some pairs will double-brood if they are successful early. Incubation is shared and is protracted; accurate data are few, but values from 30-36 days recorded. Chicks fledge after 35-40 days; chicks are guarded by one or both parents during their first 3 weeks at least, often becoming increasingly independent before fledging.

Wrybills usually allow a close approach. When incubating, they rely on camouflage to avoid detection, and flush from the nest very late. Distraction displays are used to defend nests; banded dotterels are aggressively chased if close to eggs or chicks. Chicks freeze to escape detection (especially when small), and swim well from a few days old. Away from the breeding grounds, wrybills are highly gregarious and form dense flocks, normally also very approachable.

Northward migration typically begins in late December, and peaks in January. Southward migration is mainly in August and early September (adults), with some first-year birds (which will not breed) following in October-November.

On the breeding grounds, wrybills consume a wide range of aquatic invertebrates, but predominantly mayfly and caddisfly larvae. On wintering grounds, a range of small marine and littoral invertebrates are taken (including annelid and polychaete worms, small molluscs, and insects), and the occasional small fish.

Pierce, R.J. 1979. Foods and feeding of the wrybill (Anarhynchus frontalis) on its riverbed breeding grounds. Notornis 26: 1-21.

A relatively small pale plover with a long black bill curving to the right, dark grey to black legs and, in breeding males, a black line above the white forehead. The underparts are white, with a black upper breast band from mid-winter to the end of the breeding season, and the upperparts and sides of the face are pale grey.

Bird near its nest in riverbed

Calls from male near nest

Anxiety calls from pair near nest

Calls of adult near well-grown young