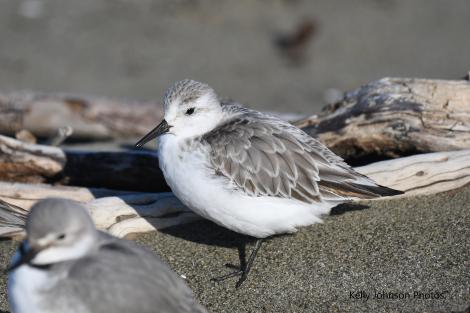 The sanderling is a small wader, slightly larger than red-necked stint, that is often found on exposed sandy beaches. In non-breeding plumage it is the palest of all the small waders. They characteristically run very fast, avoiding surf wash on the beach, and typically look busy.

The sanderling is a vagrant to New Zealand, with one or two birds recorded most years.

The sanderling is a small wader with dark legs and a stout, straight black bill. In non-breeding plumage the back and crown are pale grey, as are the upper wings, which also possess a prominent white wing bar and dark grey/black leading and trailing edges. Juvenile plumage is similar but shows spangling on the back. In breeding plumage the head, throat, upper breast, upper forewings and upper back are rufous and look scaled and streaked. The rufous on the breast is strongly demarcated from the white lower breast and belly. In all plumages the underwing is white. Females are slightly larger than males. Siberian birds show greater sexual dimorphism than those from Canada and Greenland. Sanderlings run rapidly with legs moving so fast that they can seem like wheels, and feed busily. They repeatedly dash up beaches in front of advancing waves and then race after the receding water to feed in the wet sand. Sanderlings feed in sand and mud with rapid pecking or probing.

Similar species: dunlin is slightly smaller and has a thinner curved bill. Sanderling has a shorter darker bill, more white in the wings and lacks a hind toe. Common sandpiper and shore plover are small waders with a similarly prominent white wingbar apparent in flight, but have very different markings if the bird is seen well after landing.

Sanderlings breed in the Arctic and migrate (from mid-July to mid-August) to the coasts of western and southern Europe, Africa, North and South America, southern Asia and Australia (arriving in September and departing in March). They typically spend the non-breeding season on sandy beaches and estuaries.

World population 620,000 to 700,000 birds. About 10,000 migrate to Australia, some overwinter. A regular vagrant to New Zealand, with one or two birds reported most years, from Northland to Southland, and twice to Chatham Island (including 3 birds in December 1985). Sites where sanderlings regularly occur include Parengarenga Harbour, Kaipara Harbour (Tapora and Papakanui spit), Maketu, Farewell Spit, Lake Ellesmere, and Waituna Lagoon, Southland. Most sightings are of single birds, but flocks of 4-6 birds have been recorded at most of the above sites.

Sanderlings breed mostly within the Arctic Circle. They can be either monogamous or polyandrous; often two clutches (or three or more in cases of polyandry) of 4 eggs, one incubated by the female, the other by the male, laid in a depression in bare earth from mid-June.

Sanderlings are gregarious and often found with other waders in coastal areas, particularly on sandy beaches, but also tidal mudflats.

A small wader with dark legs and a stout straight black bill. In non-breeding plumage the crown, back and upper wings are pale grey with white wing bars and dark grey-black leading and trailing edges; juvenile plumage is similar but shows spangling on the back.

Birds chasing each other