Geographical variation: Populations of large skuas occur in the North Atlantic, and Southern Hemisphere from Patagonia, through Falkland Islands, Scotia Arc Islands and Antarctic Peninsula, circumpolar subantarctic islands, to New Zealand subantarctic and islands off Stewart Island. Skua taxonomy and naming is disputed by experts, with some designating the genus as Stercorarius, others as Catharacta and the different populations variously to antarcticus, lonnbergi, hamiltoni or skua, as species or subspecies. New Zealand‘s subantarctic skuas are currently referred to in New Zealand as Stercorarius antarcticus lonnbergi. 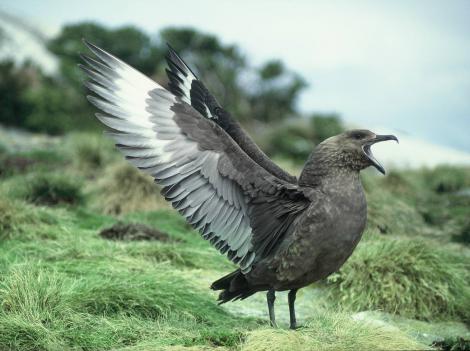 The subantarctic skua is, alongside giant petrels, a top avian predator in the subantarctic and other southern New Zealand islands. In contrast to the gulls, it is a truly oceanic seabird. Not regularly seen from mainland New Zealand, they are distinctive heavy dark birds of offshore waters, strikingly larger and more powerful than southern black-backed gulls.

The subantarctic skua is a large, heavy-set brown gull-like bird with 1.5 metre broad pointed wings and a distinctive white outerwing patch. It is a powerful flier, which enables it to overtake many petrels and some albatross. The sexes are alike, although females are substantially larger.

Subantarctic skuas are encountered at sea anywhere around New Zealand when migrating. A few may still breed in southern Fiordland and on Stewart Island, but their main breeding grounds are on the Chatham Islands, islands around Stewart, Solander Islands, and the subantarctic Snares, Antipodes, Auckland, Campbell and Macquarie Island groups. Subantarctic skuas have also been seen in the northern Ross Sea of Antarctica at the Balleny Islands and at Scott Island, although breeding has not been confirmed at either. Elsewhere, the same form of subantarctic skua breeds on many other subantarctic island groups in the southern Indian Ocean, plus South Georgia and islands between there and the tip of the Antarctic Peninsula. Related forms occur further north on the Falkland Islands, Tristan da Cunha and Gough Islands, and in Patagonia and Chile.

When breeding, subantarctic skuas are found close to the coast, generally on exposed headlands and in areas of low vegetation. They are often associated with colonies or concentrations of prey species (penguins, prions, shearwaters) or large seal colonies that are a source of carrion. Non-breeding and ‘off-duty’ skuas aggregate at non-territorial ‘clubs’ in open ground, often near a water source.

No recent or overall data available, but likely 500-1000 breeding pairs, trios or groups in the New Zealand region. The Chatham, Snares and Stewart Island populations often breed in trios or larger groups, but co-operative breeding is rarely reported from the more southerly subantarctic islands.

At sea, possible risk of fisheries ‘by-catch’, particularly in areas beyond New Zealand Exclusive Economic Zone where ‘pirate’ fishing may occur without mitigation techniques. In the Chatham Islands and at locations around Stewart Island they are at risk from farmers shooting skuas that they believe are a problem for stock. Overall, the greatest threat for skuas is likely environmental impact of climate change on marine productivity near breeding islands affecting prey populations.

On the more southerly New Zealand subantarctic islands, subantarctic skuas are monogamous, with shared incubation, brooding, chick-feeding and defence. In the Chathams, Snares and islands around Stewart 30-50% of breeding territories are occuppied by trios and larger breeding groups. Trios are comprised of one female and two males. Pairs and trios have comparable breeding success, with larger groups much less successful. However, breeding pairs, trios and groups persist on territories for comparable periods (many years). Nests are scrapes, bare or lined with mosses or grasses. Clutch size typically 2 (rarely 3 and these more likely with trios or groups – generally all fail), eggs large, stone-brown and heavily marked. Eggs are laid September–December, and incubation takes 28-32 days. Chicks fledge at 55-60 days; at the Chatham Islands post-fledging care is evident.

Subantarctic skuas in the New Zealand subantarctic, like skua populations elsewhere, are present on their breeding grounds only during the summer, because their prey largely depart for a pelagic existence during the severe winters. Their behaviour and ecology are therefore necessarily ‘pulsed’ with the seasons. Territorial behaviour, including the fierce defence of areas, seeks to maximise feeding and breeding prospects through exclusion of other skuas. Further north, around Stewart, the Snares and the Chathams, conditions are less severe (and in the last there are human-introduced food sources too). Here the skuas can remain for most of the year, and we see the high incidence of communal breeding. This may be a consequence of territories being maintained year-round, not just seasonally.

At sea, subantarctic skuas feed opportunistically on prey and debris on or just below sea-surface, but also force albatross and petrels to disgorge by high speed pursuit and strikes from above. During the breeding season, subantarctic skuas generally specialise on one or a few avian prey species – variously penguins (eggs and chicks rather than adults), adults and fledgling petrels (particularly prions, storm petrels, diving petrels) and opportunistically other birds up to and including southern black-backed gulls. Some associate with seal or sea lion colonies, feeding on dead pups, placentas, regurgitations and faeces. Birds in non-migratory populations feed on goose barnacles and other marine invertebrates, when vertebrate prey are scarce or absent..

Hemmings, A.D. 1994. Cooperative breeding in the skuas (Stercorariidae): history, distribution and incidence. Journal of the Royal Society of New Zealand 24: 245-260.

A large, heavy-set brown gull-like bird with a black hooked bill, black eyes and legs, and long broad pointed wings each with a distinctive white outerwing patch. The sexes are alike, although females are substantially larger.

Long calls from a feeding flock