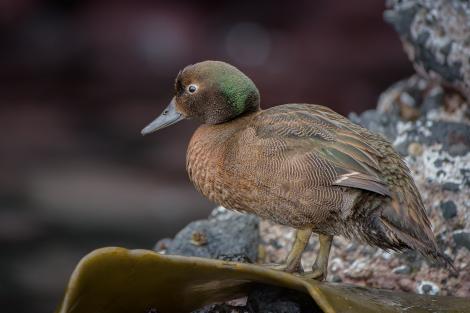 The flightless Auckland Island teal is endemic to the subantarctic Auckland Island group, which are located about 500 km south of Bluff. Teal remain abundant on the smaller islands in the group, but have been extirpated on the main island through predation by introduced cats and pigs. The Auckland Island teal is one of three brown-plumaged teals endemic to the New Zealand region. It is descended from the brown teal of mainland New Zealand but is recognised as a separate species on account of its geographic isolation and plumage, size and genetic differences.

The Auckland Island teal is sexually dimorphic in plumage and size. Both sexes are darkish brown, but males have a green iridescence on the head, dark chestnut breast, and conspicuously barred light and dark brown flank feathers with a smudgy white patch at the tail base. Females are a uniformly dark brown. Both sexes have a conspicuous white eye ring, dark-grey bill, legs and feet, and dark brown eye. Their wings are very short, with the main wing feathers extending only about half-way along the back.

Voice: calls are similar to brown teal. Soft male calls, usually described as trills or piping, given in alarm and in territorial defence. The female has a rasping growl and a high-pitched and rapid quack.

Similar species: the flightless Campbell Island teal on Campbell and Codfish (Whenua Hou) Islands is smaller and darker, but can only be identified by location. The flighted brown teal on the New Zealand mainland is larger and has relatively and absolutely larger wings that reach to the base of the tail when folded.

Auckland Island teal are primarily observed fossicking the shoreline and windrows of kelp on protected shorelines. They also occur along peaty streams and on pools in wetlands with abundant sedge and tussock cover. On Disappointment Island it lives in seepages amongst seabird burrows and mollymawk nests and without access to the shoreline. On Adams Island it can be encountered occasionally in streams high up on the island’s southern slopes.

Auckland Island teal are commonly seen but never numerous. The population is likely to exceed 1000 following their recent increase on Enderby and Rose Islands.

Auckland Island teal occur on seven pest-free islands but birds have not been able to re-establish on main Auckland Island in the presence of the pigs and cats which contributed to their exterminated there.  Eradication of rabbits from Enderby and Rose Islands in 1993 resulted in an increase of teal on both islands following recovery of grasses and rushes along streams and along sheltered shorelines. They are probably the most secure of all three of New Zealand’s brown-plumaged teals.

Auckland Island teal are monogamous and fiercely territorial. Territories along shorelines are the smallest (40 – 100 m2) and those covering sparse wave platforms and grassland the largest (1000 – 3700 m2). All reproductive activity is confined to territory. Males often loaf conspicuously at the shoreline edge of their territories.

Egg-laying may commence at end of October and first broods are encountered in early December. Young broods have been observed in March and April suggesting relaying by early failed breeders. Each pale fawn egg weighs almost 15% of the female’s body weight which is, proportionately, one of the largest eggs laid by any waterfowl. Incubation of the 3-4 eggs is by the female alone and lasts 30-35 days. The nest site, usually well secreted at the base of tussock or sedge clumps or in fern, is used as a daytime refuge for the growing young. Both adults contribute parental care. Fledging period in the wild unknown but in captivity, ducklings reach adult weight in 50-60 days.

Pairs maintain territories year-round, unpaired birds living furtively between territories or, where windrowed kelp accumulates in sheltered shorelines, as a small flock. Auckland Island teal are generally crepuscular but often roost in full sun in protected locations or where birds have unobstructed vision to see their main predator, the southern skua.

Auckland Island teal are predominantly carnivorous, feeding on small marine invertebrates, crabs and molluscs, and terrestrial arthropods and their larvae. They also strip seeds from rushes and grass seedheads, and dabble in peaty pools and ooze.

A small flightless darkish brown duck with white eye rings, dark brown eyes, dark grey bill, legs and feet, and very short wings with feathers that extend about half-way along the back. Males have green iridescence on the head, a dark chestnut breast, and barred light and dark brown flanks with a white patch at the tail base; females are uniformly dark brown.