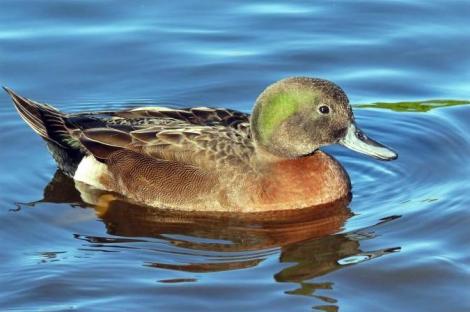 The brown teal is the largest and only flighted member of the three brown-plumaged teals endemic to the New Zealand region. It is the progenitor of the flightless Auckland and Campbell Island teals but all are now recognised as separate species on account of their geographic isolation and their plumage, size and genetic distinctions. The brown teal was an abundant and widespread species 200 years ago, but became highly endangered due mainly to the impacts of introduced predators. It has responded well to management at a few locations, and can be locally common when protected from predators.

Both sexes of brown teal are darkish brown, but they are sexually dimorphic in plumage and size. Males in breeding plumage have an indistinct green iridescence on the head, occasionally a narrow white neck ring, dark chestnut breast, and conspicuously barred light and dark brown flank feathers with a whitish patch at the tail base. Females and juveniles are a uniformly dull but dark mottled brown. Both sexes have a conspicuous white eye ring, dark-grey bill, legs and feet, and dark brown eye. Their wings appear short, their upper and lower surfaces brown and the speculum on the secondary feathers is green.

Voice: male calls are soft, usually described as trills or piping, given in alarm and in territorial defence. The female has a rasping growl and a high-pitched and rapid quack.

Similar species: the flightless Campbell Island teal on Campbell and Codfish (Whenua Hou) Islands and Auckland Island teal at Auckland Islands are both slightly smaller with very short wings, and do not become as brightly coloured as the breeding male brown teal. Grey teal and vagrant chestnut teal  both have obvious white patches on the upper-wing, whitish under-wings, and red eyes.

Brown teal are endemic to New Zealand and, in pre-human times, may have been the most widespread and numerous of New Zealand’s waterfowl. They were also formerly on Chatham Island until about 1925, and Stewart Island until 1972. Brown teal are mostly restricted to northern North Island (Northland, Great Barrier and Little Barrier Islands and Coromandel Peninsula).

The brown teal population was estimated at 1500-2500 birds in 2011. Population estimates for the three principal aggregations in Northland, Great Barrier Island and Coromandel are usually extrapolated from counts of birds at summer flock sites but there remains uncertainty about what proportion of each population assembles at these sites. Recently established populations elsewhere comprise approximately 100 birds.

The brown teal is probably the least secure of New Zealand’s three brown-plumaged teals on account of its vulnerability to and exposure to mammalian predators, and to ongoing deterioration of agricultural habitats in which it is forced to reside. Recovery of teal populations on mainland sites requires permanent and assiduous predator control or predator exclusion. Although Great Barrier Island presently lacks mustelids and has limited pastoral farming, expanding human settlements and household pets threaten the population’s expansion there.

Brown teal are monogamous and generally fiercely territorial. Most nesting is in late winter (July-September) but broods have been encountered in most months except late autumn. Typically nests are buried in dry locations deep within bases of rush, grass or fern clumps near water. Large pale fawn eggs, each about 10-11% of the female’s body weight, are generally laid daily. The average clutch is 5 or 6 (range 3 – 9) and the incubation period extends for about 28 days. Both parents guard the ducklings during their 50-55 days until fledging; the brood is usually raised within the territory.

The mature ducklings are forcefully evicted from the territory on or about the time the parents start their post-breeding moult.

Brown teal populations generally comprise a single aggregated flock and numerous widely dispersed pairs. Some pairs may occupy exclusive territories year-round in water-rich locations whereas others vacate their territories seasonally and return to them when autumn rains replenish water levels. These territories contain abundant food and escape cover and suitable nesting and brood-rearing habitat. Pairs using streams as territorial sites will forage and nest well beyond the stream margins.

Flocks arise from mid-summer aggregations of recent fledglings and of early moulted adults whose winter ranges have dried out. Other seasonally displaced adults also join but will leave the flock following autumn rains. Non-breeding birds may remain as a flock through winter and spring.

Brown teal are generally crepuscular to nocturnal in habit in agricultural and forested environments but at coastal sites feeding and loafing activity may also be influenced by tides, the birds being more active at low tides.

A brown dabbling duck with white eye rings, brown eyes, black and grey bill, legs and feet, and green speculum on the secondary wing feathers. Males in breeding plumage have green iridescence on the head, a narrow white neck ring, dark chestnut breast, and barred light and dark brown flank feathers with a whitish patch at the tail base; females are uniformly dull brown with dark brown mottling.