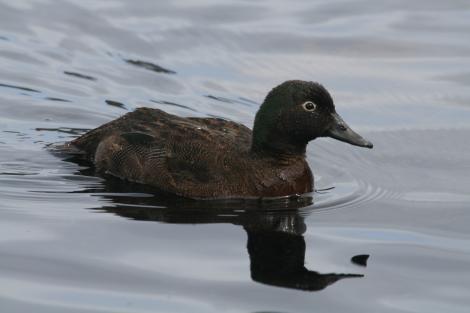 The Campbell Island teal is the smallest of the three brown-plumaged teals endemic to the New Zealand region. Both sexes are darkish brown, but are sexually dimorphic in plumage and size. Males are entirely dark sepia with a green iridescence on the head and back, dark chestnut breast, a paler brown abdomen and a conspicuous white patch at the tail base. Females are a uniformly dark brown with a paler abdomen. Both sexes have a conspicuous white eye ring, dark-grey bill, legs and feet, and dark brown eye. The wings are very short, with the main wing feathers extending only about half-way along the back.

Voice: calls are similar to those of brown teal and Auckland Island teal. Male calls are soft trills or piping, given in alarm and in territorial defence. Females have a rasping growl and a high-pitched and rapid quack.

Similar species: the flighted brown teal of the New Zealand mainland is larger, more colourful when in breeding plumage, and has wings that extend to the base of the tail when folded. The flightless Auckland Island teal at the Auckland Islands is slightly larger and paler, but can only be separated from Campbell Island teal by location.

Campbell Island teal are endemic to Campbell Island. A small population, sourced from captive-raised birds has persisted on Codfish Island, off Stewart Island, since 1999. The main population on Campbell Island is derived from birds re-introduced in 2004-06, bolstered by natural recolonisations by birds swimming from Dent Island.

Campbell Island teal are considerably more furtive than their Auckland Island relatives. They are most likely to be encountered at the shoreline picking among rocks or any beach-cast seaweed, and along peaty streams and about pools in wetlands with profuse sedge and tussock cover in Perseverance Harbour, Campbell Island. They also occurs on Six-foot Lake, at the head of Northeast Harbour and in Northwest Bay on Campbell Island and at Sealers Bay and adjacent Penguin Bay on Codfish Island.

Campbell Island teal are secretive at Campbell Island, making population estimation difficult. The most recent attempt to locate birds on the island (2009) indicated a minimum presence of 102 birds. Populations on Dent and Codfish Islands have not been surveyed in the past decade, but both are probably tiny (<30 birds).

The Campbell Island teal came very close to extinction, with a tiny remnant population surviving on Dent Island after Norway rats wiped out the main population on 11,000 ha Campbell Island. The captive-breeding programme took many years to produce any young, and in the end only one of the three wild females brought into captivity produced offspring. The entire captive-bred population is descended from this one female, and the Campbell Island teals has among the lowest level of genetic variation measured in any wild bird population. Any return of rats to Campbell Island would severely threaten this species and most likely force a resumption of past captive breeding efforts.

Campbell Island teal are probably monogamous and strongly territorial, and with all reproductive activity and feeding confined to the territory. On Codfish Island, egg-laying commences at the end of November, and newly-hatched broods are encountered from early January to February. From 14 nests there, clutch size was 2-5 pale fawn eggs (mean 3.5). On Campbell Island, incubated nests containing clutches of 4 and 5 eggs have been found from mid-November to mid-December.

Eggs laid in captivity averaged 62 x 43 mm with a calculated weight of 65 g, approx. 15-20% of a wild female’s body weight. Both adults contribute parental care. Fledging period in the wild is unknown but in captivity, ducklings reach adult weight in 50-60 days.

Campbell Island teal are difficult to study in the wild due to the inaccessibility of the sites where they occur, the dense vegetation they inhabit, and the birds’ furtive and nocturnal behaviour. Pairs probably maintain territories year-round. On Codfish Island a small flock sometimes gathers at the mouth of Sealers Creek. Campbell Island teal are rarely active during the day or venture far from protective cover. At night they have been observed feeding on tidal flats at the head of Perseverance Harbour, Campbell Island and fossicking along the inlet’s rocky shoreline.

The diet of Campbell Island teal is unknown in the wild, but they are probably omnivorous with a preference for invertebrates. They have been observed stripping seeds from rushes and grass seedheads and dabbling in peaty ooze and along a stream edge on Codfish Island.

A small flightless dark brown teal with white eye rings, dark brown eyes, and dark grey bill, legs and feet, and very short wings with feathers that extend about half-way along the back. Males are dark sepia with green iridescence on the head and back, a dark chestnut breast, a paler brown abdomen and a white patch at the tail base; females are uniformly dark brown with a paler abdomen.