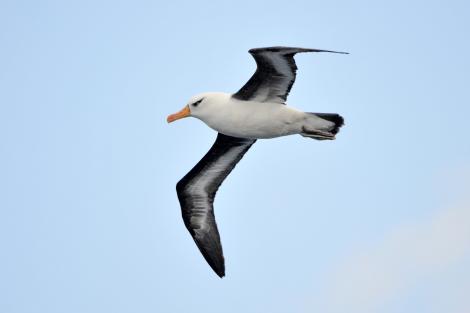 The Campbell black-browed mollymawk is one of 12 species of albatross that breed in New Zealand, and one of seven endemic species. It is one of the smaller albatrosses, and characterised amongst this group by having an all-yellow-orange bill, and all white body. There is a black triangle around the eyes which contrasts strongly with the otherwise white head and gives the appearance that the bird is frowning. The upper wings are dark, and the underwings are white with broad black edges. The eyes are honey-coloured, which is the main distinguishing feature from the more widespread black-browed mollymawk, which has dark eyes.

Campbell black-browed mollymawk are found throughout the continental shelf area of southern New Zealand waters, and feed on small fish, squid and crustaceans, mainly in water depths less than 200 m. It is commonly found south of Cook Strait, but occurs as far south as 60° South, and around East Cape in the autumn to winter.

Voice: a range of croaks, wails, throbbing groans, and grunts.

Similar species: the black-browed mollymawk (=albatross) retains a dark iris into adulthood and has a whiter underwing (i.e the black margins are broader in the Campbell Island birds). The Indian Ocean yellow-nosed mollymawk is another small albatross with a white head, but has a much slimmer, more elongated body shape and a proportionally much longer bill which (in adults) is black with a yellow strip along the top. It also has a much whiter underwing. Juvenile grey-headed mollymawks may be indistinguishable from juveniles of the two black-browed mollymawk species, as while the latter are generally paler on the head, all three can pass through a dark-headed stage with an olive-brown bill.

Campbell black-browed mollymawks nest only at Campbell Island and offshore Isle de Jeanette Marie, where they breed on coastal cliffs alongside grey-headed mollymawks, often in mixed colonies. They occur throughout New Zealand seas, mainly south of Cook Strait in summer, and East Cape in autumn. Campbell black-browed mollymawks range widely in Australasian seas, even reaching the Ross Sea during the breeding season (September-May). Vagrants have been recorded north to Vanuatu, New Caledonia and other Pacific islands, but they are very rare in the Indian Ocean, and not known from the South Atlantic. Campbell black-browed mollymawks often follow ships and may spend a day or more keeping close to vessels in their zone, and scavenge actively for fish waste or offal released from vessels. Their feeding habitat is mainly in waters deeper than 200 m.

The numbers of Campbell black-browed mollymawks nesting at Campbell Island have been monitored sporadically since the 1940s, and showed a major decrease in numbers during the 1970s and 1990s. The most recent population estimate was around 21,000 breeding pairs.

The Campbell black-browed mollymawk has a secure breeding site with no introduced predators, (although Norway rats and feral cats were formerly present, and may have had some impact). Current threats are likely to result from changes in food availability within the foraging range of the birds, affecting how far they need to fly when feeding chicks. Occasional incidental mortality is noted for the species in longline fishing events, but this is a rare event.

Campbell black-browed mollymawks form long-term monogamous pair-bonds, with shared incubation and chick care. They breed annually, laying the single large (103 x 66 mm) creamy white egg on a pedestal earth nest in September or October, and incubating it for 65-72 days until it hatches in January or February. The chick is fed by regurgitation, and fledges in April-May when 120-125 days old. They typically breed when 10-12 years old, and may live for more than 30 years.

Campbell black-browed mollymawks are solitary at sea, although may raft in small groups. Birds foraged during breeding by both short and long range flights of > 1000 km. The main feeding area, is on the Campbell Plateau, but birds often fly as far as the Polar Front, 1000-1500 km south of Campbell Island. Campbell black-browed mollymawks often forage behind fishing boats, competing aggressively for offal and discards.