Geographical variation: None formally described, but four geographical forms are recognised for management purposes, based on marked genetic differentiation within the species: Northland, Coromandel, Western, and Eastern. 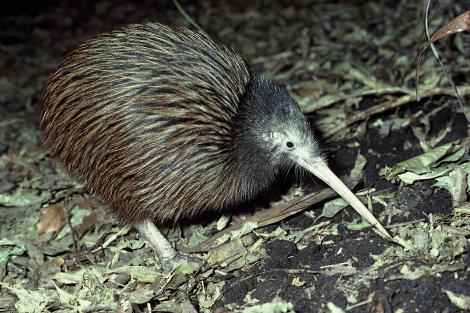 Similar species: weka have similar brown colours, but are smaller and have a short bill. The calls of weka are also similar, but have two-syllables and usually have fewer repetitions.

Widespread and locally common in native and exotic forests, scrub and rough farmland in Northland and some of its offshore islands, several islands in the Hauraki Gulf, including Little Barrier, Kawau and Motuora, Coromandel Peninsula, Bay of Plenty, Gisborne, northern and western Hawkes Bay, Tongariro, Taranaki, and Whanganui. Newly established populations at Tawharanui (North Auckland), Maungatautari (Waikato), Cape Kidnappers (Hawke’s Bay), Pukaha/ Mt Bruce (Wairarapa) and Rimutaka Range (Wellington). At the time of European settlement they had a wider distribution, especially in North Auckland and the Waikato.

About 25,000 birds in 2008; 1000 on the Coromandel Peninsula, and the rest evenly split between the Northland, Eastern and Western taxa.

North Island brown kiwi have disappeared from many lowland sites and around the fringes of their distribution, through a combination of habitat loss and predation by mammalian predators, especially dogs, ferrets and stoats. Hourly call rates across the whole range is slowly declining, but landscape scale management of predators through periodic aerial 1080 (sodium monofluoroacetate) operations, or trapping, has slowed or reversed the declines in many areas. The removal of eggs or young chicks from the wild and the rearing of chicks and juveniles in captivity or in predator-proof crèches, until large enough (1.2 kg) to cope with the presence of stoats, has allowed these populations to increase, or allowed releases into areas where the population had dwindled or become locally extinct.

Eggs can be laid in any month, but the peak of laying is from June to November. The nest is in a short burrow, rock crevice, hollow base of a tree, or in a hollow log. Clutch size is 1-2. The white egg is very large. Incubation is by the male only. Eggs are left unattended during the night, but the time that the male is off the nest declines as incubation progresses.

Brown kiwi are flightless and nocturnal. During the day they rest in a burrow, hollow tree or log, or under thick vegetation and emerge shortly after nightfall. Feed by walking slowly along tapping the ground and when prey is detected they probe their bill into the leaf litter or a rotten log; occasionally plunge their bill deep into the ground. Call occasionally each night to advertise territory and to maintain contact with partners; pairs often duet, with the partner responding a few seconds after the first call has been completed.  They are territorial, and fight conspecifics with their sharp claws.