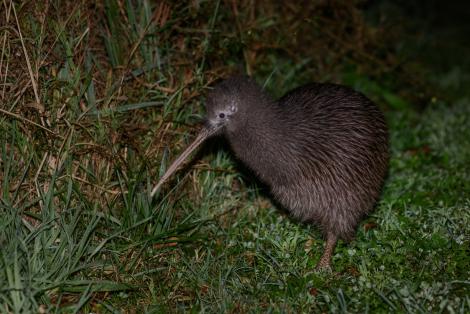 Rowi disappeared from most of their range in the southern North Island and northern South Island. Since European settlement have been known only from the Okarito area, in roughly the same range as occupied now. Up until the 1990s, they were declining due to recruitment failure caused by predation of chicks and juveniles by stoats, and some adults being killed by dogs and motor vehicles. In 1995, their population was estimated at 160 birds. 'Operation Nest Egg' (the removal of eggs or young chicks from the wild and the rearing of chicks and juveniles in captivity and on Motuara Island, until large enough (1.2 kg) to cope with the presence of stoats), allowed the populations to increase to about 200 birds by 2000. A landscape-scale stoat trapping programme in South Okarito Forest from 2001 to 2005 largely failed to protect chicks from stoat predation. Operation Nest Egg was therefore reinstated, and the population has grown rapidly to the 375 birds in 2012. New populations have been established on Mana and Blumine Islands.