Geographical variation: New Zealand birds were of the subspecies P. cafer bengalensis, which occurs as introduced populations on several island groups in the south-west Pacific. 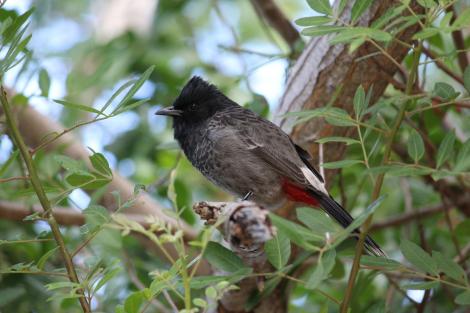 Red-vented bulbuls are slim, starling-sized songbirds with predominantly dark plumage. They are typically bold and conspicuous, with repetitive, monotonous calls. Their slim build and curved bill are reminiscent of a honeyeater (e.g. bellbird or tui), although they are not closely related. The two most distinctive identification features are a small erectile crest on the crown (giving them a square-headed Roman helmet look when the crest is raised) and the diagnostic bright red patch between the base of the legs and the undertail. The head, hindneck and upper breast are glossy black, with a circular brown patch over the ear. This dark hood becomes streaked or scaly on the lower breast and merges into the pale grey belly. The upper wings and mantle are mid-brown with pale margins when in fresh plumage, creating a scaly appearance. The rump is white, and the tail is long and blackish with a prominent white tip. The bill, eyes and legs are dark. The sexes are alike, although males are slightly larger. Juveniles are dull brown with an orange or pinkish (cf. red) vent.

Voice: a wide range of calls, from clear whistles to harsh chattering. The usual calls are a 2-3 syllable whistle pee-plo, pee-pee-plo or 'ginger-beer', and a harsh double croak cark-cark. Loud scolding or chattering alarm calls may be directed at predators.

No viable wild populations are known in New Zealand. Most New Zealand sightings were of single birds and pairs among leafy Auckland suburbs. Up to 50 birds established from 1952 onwards, in the suburbs of Remuera, Mt Eden, Stanley Bay and Takapuna, but were eradicated by 1955. Bulbul sightings have been reported sporadically around Auckland since the mid-1980s. Recent sightings (of birds since destroyed) have included Devonport, Parnell and Howick in 2005-06, three clusters in 2013-14 (Mangere, Mangere Bridge and Alfriston; Henderson, Lincoln and Massey; and Devonport, Belmont and Northcote, with an isolated sighting in Whangaparaoa), and one near Te Puke in May 2016. If red-vented bulbuls become established in New Zealand, they are most likely to spread throughout urban and horticultural areas in the northern North Island.

The natural range of the red-vented bulbul includes India, Pakistan, Nepal, Myanmar and Sri Lanka. They have been introduced into many countries, including Fiji, Tonga, Samoa, New Caledonia, Tahiti and Hawai’i.

The main reason that efforts are being made to eradicate red-vented bulbuls in New Zealand is to eliminate any potential threat to horticulture, as the birds eat a wide variety of soft fruit and berries. Bulbuls are also aggressive, and may impact on native species in urban areas if they become established.

The only breeding recorded in New Zealand was a nest with 3 fresh eggs about 3 metres above the ground in a pine tree in Stanley Bay in December 1954. The nest was a lightly constructed shallow cup of twigs and coiled fibres, with a scanty lining of fine fibres, firmly anchored to a pine branch. The eggs were about 24 x 16 mm, pinkish, and marked all over with spots and blotches of reddish brown and pale purplish brown, especially around the widest part. In January 1955 a young bird begged for food from its presumed parent in Remuera.

Red-vented bulbuls are active and restless. They have a direct flight with rapid wingbeat, or may undulate over short distances, displaying the bold white rump. They often hawk for insects, with conspicuous fluttering beyond the foliage of shrubs and trees. Once established, red-vented bulbuls form flocks when not breeding.

Red-vented bulbuls are omnivorous. The main diet is fruit, but insects are also taken, particularly during the breeding season. Flowers and nectar are also consumed, and there are records of small lizards being taken on Pacific islands. In New Zealand they were recorded eating introduced wasps, native bees, cicadas and fruit, including plums and apples.

A slim, dark, starling-sized bird with a white rump and white tip to the otherwise blackish tail. If seen closely it has an erectile triangular crest on the top of the head, and a bright red patch at the base of the undertail.