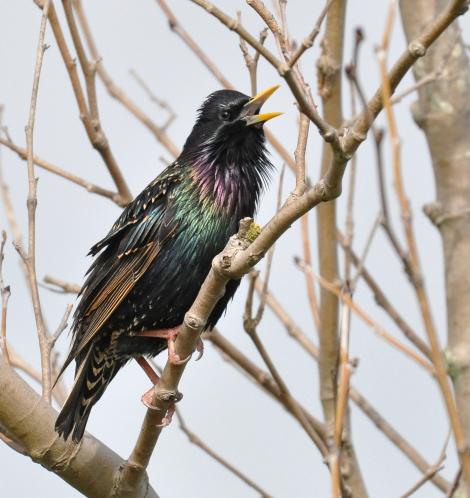 Starlings from Europe were introduced for insect control to North America, South Africa, Australia and New Zealand, and are still spreading at 22 km/year in Argentina. They have iridescent purple and green feathers tipped with white spots, but appear black at a distance. Large flocks roost communally at traditional sites, spreading out to pasture and urban feeding grounds each day. One of the commonest garden birds, starlings are easily recognised by their noisy, hyperactive behaviour. They are resident throughout New Zealand on open country, including most offshore islands.

Starlings are compact, with short tails, and appear smaller than thrushes or blackbirds although of similar weight. Their feathers have white spots which wear off, leaving a dark iridescent breeding plumage. Wing and tail feathers are blackish, edged with pale brown. Males' eyes are dark; females have a pale brown edge to the iris. The sex and age (as first-year or older) can be told from the length of iridescence on the throat hackle feathers. Juveniles leaving the nest are pale greyish brown, and join in flocks of 20-100. Feeding flocks progress in a rolling fashion as birds in the rear overtake the leaders. Starlings probe with the bill shut, then open it to look into the hole formed. Their eyes, placed far forward in the skull, give binocular vision. Their flight is strong and direct, and evening aggregations of thousands wheeling in unison are spectacular, especially when falcon attacks cause waves of cohesion.

Voice: shrill whistles, song with interspersed clicks and gurgles, and a penetrating scream when handled. Starlings can imitate other sounds (e.g. police sirens, telephones, voices) with uncanny accuracy, and incorporate calls and song phrases from other bird species in their song.

Similar species: there are no similar species in New Zealand, where the only other member of the same family is the common myna. Juvenile starlings are greyish-brown, paler under the chin, and have been mistaken for thrushes, cuckoos, and even waders; but their shape, eye position and behaviour are characteristic.

Starlings occur throughout New Zealand, from sea level to 1500 m altitude, in all open country, on the coast, and in towns. They are absent from alpine areas and native forest, although they may nest at forest edges. Starlings are resident on the Kermadec, Snares, Antipodes, Auckland and Campbell Islands, and are vagrant to the Bounty Islands. Their natural distribution is in the palaearctic, from the United Kingdom east to Lake Baikal. Starlings were introduced to eastern USA (1890) and spread west and north to Canada and Alaska (1952), and south to Mexico (1953). They were also introduced to Australia (1857), New Zealand (1862), South Africa (1898), and Argentina (1987), and spread east to Japan (1969).

Common starlings increased dramatically soon after their introduction to New Zealand. For example, 4 in Napier became “hundreds of thousands” within 11 years. Numbers then declined and stabilised, but there was a marked decrease following the widespread use of DDT from the 1950s until it was banned in 1968. New Zealand starlings still accumulate more DDT than in any other country, but probably not to lethal levels, and they remain one of our commonest birds. European populations have declined by half in the past 30 years.

Starlings, introduced to control caterpillar plagues, were apparently successful. Their use in grass grub control has been bypassed by chemicals, but may become important in an organic future; some farmers encourage them with nest-boxes (millions are in use in Russia). Damage to farm animal feed lots, cereal crops, and fruit may be locally severe. They remove ticks from sheep and cattle; but could spread the bacterial and viral diseases ticks carry. Pest control operators list about 24 diseases carried by starlings, although "the evidence is largely indirect and circumstantial." Their nests have caused at least one death by blocking chimneys, and they have similarly caused fires in aircraft, and hundreds of fires in tractors and other farm machinery.

Starling flocks are significant in the 400 bird strikes per year reported in New Zealand. Nests under house eaves are noisy, smelly, may attract rodents, and are often infested with fleas and mites. Communal roosts on islands become a source of weeds such as boxthorn, and may spread diseases like avian pox to bird reserves; roosts in towns are a public nuisance, with corrosive droppings. Competition for nest boxes has been identified as a potential problem at some restoration sites, with starlings using nest boxes placed for black robins, Forbes' parakeets and yellow-crowned parakeets on Rangatira, Mangere and Mana Islands. However, an American study found the effects of starlings on populations of 27 cavity-nesting birds to be practically non-existent, and none of the New Zealand studies have demonstrated that the native birds were limited by nest site competition.

Starlings nest in cavities: in hollow trees, dead tree-fern trunks, under the eaves of houses, in letter boxes, crevices in cliffs and burrows. Big cavities may be filled with up to a cubic meter of material. Bird boxes are readily used. The nest is usually made of dry grass lined with finer material, but anything available is welcome. They excavate sites in clay banks or roadside cuttings (recorded only in New Zealand). Some nest in open sites, e.g. ponga crowns or dense trees. Starlings often nest colonially; males defend 1-2 m from the nest, and may control several sites and females. Breeding is synchronised, with most eggs laid within 7 days of the median laying date in September-October. Unlike starlings in Europe, the start of breeding is not correlated with latitude. Replacement clutches and late starters lay in November, and successful early nesters may have a second brood in early December. Clutch size averages 4-5 (1-9), but some (10%) clutches are enlarged by dumping or two females sharing a nest. Incubation period 12 days, fledging 20-24 days. Many chicks do not survive to fledge. Males incubate in the mornings, and both parents feed the young until 1-2 weeks after fledging.

Although starlings depend on humans for access to crops, pasture, and buildings to nest in, they are difficult to approach. Much behaviour is social, as they feed, travel and roost in large flocks (in Europe numbering millions), and squabble over food, nests, and mates. Nests are visited morning and evening for most of the year. Breeding males sing with throat hackles raised, waving their wings. They lead females to the nest, carrying green leaves. At dusk they fly up to 30 km to a central roost, in trees or shrubs, often on an island or the centre of a city. These roosts are used throughout the year except by nesting females.

The main diet is pasture invertebrates, including earthworms, caterpillars, beetles and their larvae, and spiders. Starlings take grain from hen runs, and readily take food scraps in urban areas. Soft fruit (apples, pears, cherries, grapes) may be damaged. Cicadas are caught on the wing, and starlings also take nectar from flowers, and so (as a result) they are often seen with orange flax pollen on their foreheads.

A medium-sized glossy iridescent black songbird with tiny white spots, a tapering pointed yellow bill (black in winter and in juveniles), and a short tail and orange-red legs. Males have dark eyes and females have a pale brown edge to the iris; juveniles leaving the nest are pale greyish brown and lack white spots.

Nestlings under eaves of house

Song (tomtit and traffic in background)